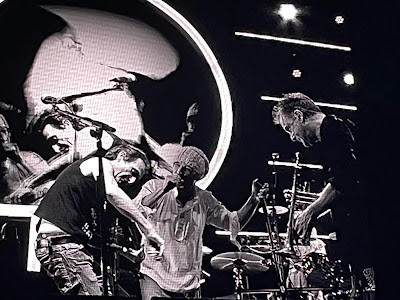 James’ tour in support of their All The Colours Of You album with Happy Mondays rolled into Glasgow on Tuesday night for a show at the Hydro that once again contained a real mix of the old and new with a finale that had the whole floor bouncing out of the cavernous hall.

Happy Mondays' set tonight is cut from the hour they've had at previous shows so we're treated to a truncated seven-song set and they go down a storm with the Glasgow crowd, clearly one of their most favourite places to play where the love is reciprocated. It's also home to their manager Alan McGee who comes out on stage to take the applause of a fervent crowd - Shaun describes him as "my best mate apart from Beswick." The hall is noticeably fuller than on previous nights and the Mondays deliver their best set yet, feeding off the crowd's energy and Shaun being on particularly enigmatic form. 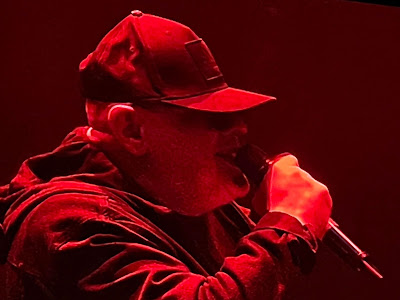 The likes of Kinky Afro, Loose Fit, Hallelujah, Step On and WFL are clearly anthems that resonate around much of the crowd judging by the attempts at recreating Bez's dancing and evoking memories of the heady age of Madchester. Once again, Rowetta, Gaz Whelan on drums, Paul Ryder on bass and Mark Day on guitars provide the rock solid framework that allows Shaun to be Shaun and for Bez to prowl the stage showing off some of the skills that has him on Dancing On Ice again next year. WFL, like their best moments, teeters on the brink of collapse, but ends up being something of a triumph given the roar of appreciation at the end.

"Ah there you are" Tim yells at the Glasgow crowd as the predictable "here we fucking go" monotone ramps up as Sound hits the breakdown before adding "you didn't seem interested" at the end of the song. He has a point, the normally fiery Glasgow audience had been subdued up to this point, be it COVID, the impersonal nature of the Hydro and the distance between performer and audience, the reported five hundred ejections for drunken and other unruly behaviour or the awkwardness of the set not sitting well with an audience that more than others feed off the more well-known James songs as a flashback to nights at the Barrowlands that get talked about as things of legend.

The end of the night recalls that, we've not seen an arena bounce as one as they do to the final valedictory Laid and Sit Down that precedes it introduced by Tim as a song with a new lease of life after he sang it to his father-in-law by video call just before he died. Its lyrics feel somewhat more poignant and even more so with ten thousand voices singing them. Similarly Getting Away With It and Come Home are met with howls of delight and bodies throwing themselves around the hall. 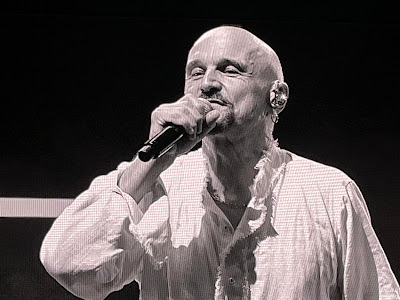 What goes before it is one of James' strongest performances for quite a few years even if the connection isn't fully made with the audience as it was earlier in the tour in Leeds and Birmingham, which was perhaps behind the decision to change She's A Star from the stripped-down version mid-set into the full electric one. The middle section of All The Colours To You through to Honest Joe in particular sees them in full flow, twisting, turning and tweaking these songs, little bits of details such as Andy and Chloe taking lead vocals for sections of songs, Tim seeking connections with his fellow band members on stage rather than with the front rows of the audience (in particular during Honest Joe where he and Debbie lose themselves in a dance-off as the song builds speeding up slowly for what seems like an eternity before stopping dead) and Jim's bass turned up and leading songs in parts.

The All The Colours Of You tracks are not budging from the setlist - Zero opens fittingly as Tim explains at the end to look at the situation we're in head on and "give it the finger" whilst Isabella seems to have found the 20% that was missing on the recorded version that Tim alluded to in interviews around the album release time as it's a bold vibrant track that stands up against anything they've done in their past alongside it in the set. All The Colours Of You and Beautiful Beaches are big hits in another time and place, both infused with the thrilling energy of a nine-piece James that is on a mission and having the best time accomplishing it.

James played Zero, Isabella, Born Of Frustration, Five-O, Seven, All The Colours Of You, Many Faces, Walk Like You, Curse Curse, Honest Joe, She's A Star, Wherever It Takes Us, Hymn From A Village, Sound, Getting Away With It (All Messed Up), Come Home, Beautiful Beaches, Sit Down and Laid.