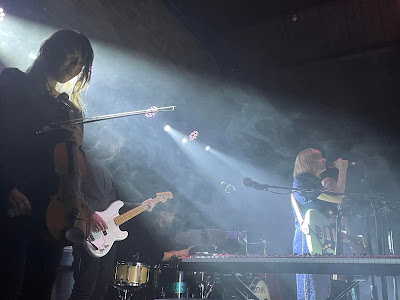 Lanterns On The Lake resumed their much-postponed tour at Hebden Bridge Trades Club on Thursday night supported by Wyldest, finally able to tour their 2020 album Spook The Herd in the country's finest small venue.
Wyldest has opened for Lanterns On The Lake on most of these tour dates and feels like a perfect complement to the headliner. Fronted by Zoe, Wyldest have quietly been producing beautifully rich and evocative music for the past six years, including two albums Dream Chaos and this year's Monthly Friend, from which the majority of the set is taken including the singles Beggar and Hollow and the magical Seastroke from a short film soundtrack that Zoe wrote last year. 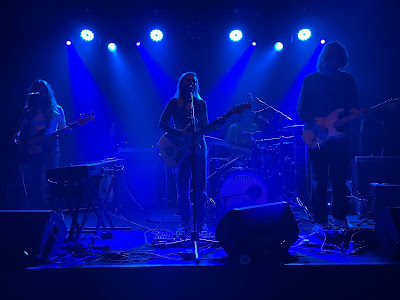 Zoe's vocals possess a deep emotional resonance that is perfectly accentuated by the understated yet essential backing of the band that allows the songs to live and breathe and the Trades audience, keeping a respectful distance, are drawn in to them as they're performed to near silence other than the applause at the end of each song. It's testament to the quality and beauty of the songs and the manner in which they're performed that they hold the audience's attention so well
The Trades Club is a perfect venue for Lanterns On The Lake - intimate, with an audience that's willing to shut up and listen to a band that demands and requires your attention, and those around you, to fully appreciate them.  The band understand this - Hazel telling us  Their most recent album Spook The Herd, Mercury-nominated last year, is played in full alongside two new songs, one so new that it's not got a title yet and Paul jokes that he doesn't know it, plus Through The Cellar Door and Baddies.
Live, the edges of the songs from Spook The Herd feel sharper, the atmospherics breathe and punctuate the reverent silence, save for the clatter of the glasses from the bar. Whether it be the softer moments with Hazel seated at the keyboards or stood with an electric guitar in hand, the live environment gives the nine songs from Spook The Herd an added poignancy and depth, whether it be the drums up in the mix, Angela's haunting violin and Paul's sonically extravagant guitar playing. 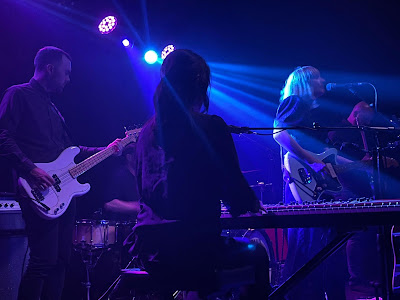 There's a moment of concern and a ten minute delay in the set when an audience member faints, and in true non-rock and roll fashion the band's first care is for the well-being of the individual, leaving the stage to help attend to her. It doesn't disrupt the flow though as they restart the set, their encore Hazel later says, with Baddies, one of the stand-out tracks on an album full of them, from Spook The Herd.
It's followed by Locusts, the second of the new songs that they perform from the new record they're in the progress of writing, both of which feel like a progression from the last album whilst retaining the stripped-back approach of that record. Beings, the title track of its predecessor, still forms a show-stopping moment towards the end of the set as they let loose both vocally and musically as the tension within the song builds to a crescendo.
They send us out of the door though with a soothing A Fitting End, Spook The Herd's denouement - a perfect end to a wonderful performance from a band that's operated under the radar for so long. Lanterns On The Lake don't play the industry games, they just do their thing, unassuming and modest in their manner, but they're creating some of the most timeless and beautiful music of our time in their own quiet way.
Lanterns On The Lake played When It All Comes True, Blue Screen Beams, Every Atom, Swimming Lessons, Before They Excavate, New Song, Through The Cellar Door, Secrets And Medicine, Baddies, Locusts, This Is Not A Drill, Baddies and A Fitting End.

Lanterns On The Lake's official website can be found here and they are on Facebook and Twitter. The tour continues at Newcastle Boiler Shop (December 10) Guildford Boileroom (January 12), Brighton Patterns (13), Exeter Phoenix (14) and Corsham Pound Arts Centre (15).

Email ThisBlogThis!Share to TwitterShare to FacebookShare to Pinterest
Labels: Lanterns On The Lake, Wyldest