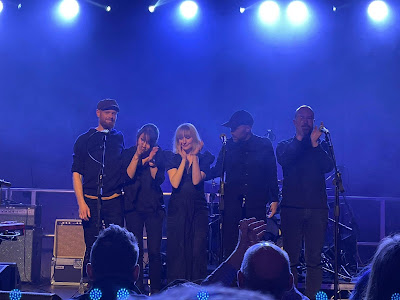 Lanterns On The Lake played their first hometown headline show for four years on Friday night at The Boiler Shop supported by Wyldest and Hector Gannet. Originally intended as a celebration of the launch of their Spook The Herd album but delayed by eighteen months by the pandemic, with promoter changed in the interim, the night still felt like a triumphant return in front of a loyal attentive audience.
It’s our first visit to The Boiler Shop and it’s an impressive set-up - the stage is high enough for everyone In the venue to see and the sound loud enough to reach to the back yet still allow enough separation to fully appreciate the intricate levels of detail in the work of both headliner and the supports. It’s also one that’s thankfully free of the influence of SSD Concerts or whatever name they’re masquerading as these days. Lanterns On The Lake had insisted that the promoter be changed for this show when the accusations against that company broke last year, effectively meaning everyone here had to repurchase their tickets mid-pandemic after being refunded for the first show; a brave move but one that underlines the independent nature of the band and their insistence on doing things the right way rather than grabbing the nearest money bag. 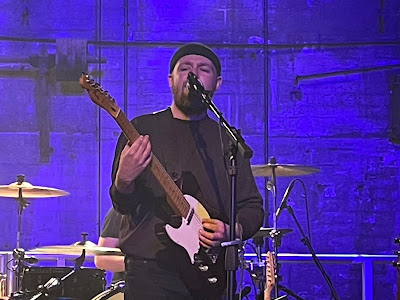 Local lad Hector Gannet opens up proceedings with his four-piece band playing tracks primarily taken from last year's Big Harcar album. Opening with Serpentine, their sound fills the room throughout the half hour set, testament to the slightly harder edge that they give the songs live. In Fading Light is a particular stand-out as Hector's rich soulful voice sits atop a tune that draws you in. He takes on Into The Deep himself, modestly telling us that he'll try and replicate the vocals Hazel from Lanterns On The Lake put on the recent release but very much putting his own spin on it. They finish with the impressive eight minute The Haven Of St Aidan's, a song that has enough ideas in it for an album in its own right, taking us down one path then diverting us across into another almost at will. The local crowd love them as they depart to a rapturous response.
Zoe from Wyldest explains half-way through their set that she's a little in awe of playing this show in Lanterns On The Lake's hometown as she was inspired to create music after attending one of their early shows. You can definitely here strands of influences in some of the songs they play even if Wyldest are a more upbeat proposition live, the four-piece of Zoe, Jennifer, Will and Reuben infusing the likes of Beggar and Hollow from this year's Monthly Friend album with a joyous vibe, that's visual as well as in the music. 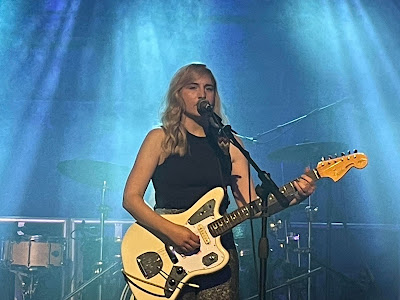 They grow in confidence in front of us as the set progresses and there's a sense that this bigger stage and hall is made for them. There's new material as well as they plan their next moves with a tour planned for next Spring. The pick of them is the final song, the prophetic The Best Is Yet To Come, a song that comes along so infrequently yet is so wonderful that you feel like you've known it for ever, familiar and soothing, uplifting and reassuring that everything will be alright in the end. If there's any justice it'll catapult Wyldest into the public conscience.
"It's been bloody ages" Hazel Wilde tells us a couple of songs into Lanterns On The Lake's triumphant set, before adding "you don't need to boo" with a smile on her face when she references the multiple cancellations since the date was originally announced way back in 2019. Much has happened since then, bad in the world, but in many ways, despite the uncertainty, good for this rather unique and special band that has finally started to get the recognition they so richly deserve. Their fourth studio album Spook The Herd, played in full in all its magnificent glory tonight, earned them a raft of critical acclaim and a Mercury Prize nomination. And tonight, in front of a partisan home crowd who adore them, there's a tidal wave of love and admiration flowing from the audience to stage and back out to us.
The Boiler Shop's crystal clear sound allows every little detail to be heard perfectly. There's moments where it sounds like there's vocal harmonies but it's Angela Chan performing some kind of magical ritual with a viola, Paul Gregory's guitar work looks eccentric at points, but when you hear what he's creating it has an other-worldly sound to it that takes the songs to a new level, in particular the final song of the main set Beings where he attacks it with a violin bow whilst Hazel loses herself in the tumultuous wall of noise her band mates create around her. 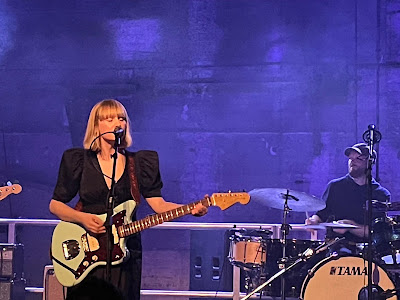 The songs from Spook The Herd push many emotional buttons on record, yet tonight in the raw cold night they delve deeper and more intensely. Secrets And Medicine is heartbreaking and painful with nothing left unsaid, Before They Excavate and Swimming Lessons' urging to let go and live more insistent, while the social commentary of Blue Screen Beams and Baddies more pointed, particularly when Hazel jibes that they were going to play it at the Downing Street party but as it's cancelled it's the last time they'll play it this year.
There's two new songs too that show that Lanterns On The Lake are thriving again. Last time they headlined Newcastle they posted a cryptic message from the lyrics of Beings that suggested the band might be calling time. Tonight they make a statement that they're going nowhere any time soon. One is so new that it doesn't have a title and was debuted the night before in Hebden Bridge, the second Locusts has been played on the tour and already feels at home. 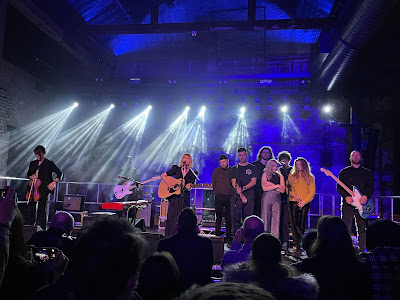 Other than Beings, there's only Through The Cellar Door from the first three albums, although one over-excited fan shouts for it a couple of songs after they've played it which causes much amusement on and off stage. There will be times for those other songs though; tonight was very much a celebration of Spook The Herd, a remarkable record that was a make-or-break one for a remarkable and unique band, taking the best part of six years from its predecessor. For the encore they invite Wyldest and Hector Gannet on stage to help with harmonies on A Fitting End, but at the end they depart to leave the five of them on stage to soak in the adoration of a Newcastle crowd that was absolutely smitten and under their spell. If the creeks don't rise, we'll see them again.
Lanterns On The Lake played When It All Comes True, Blue Screen Beams, Every Atom, Swimming Lessons, Before They Excavate, New Song, Through The Cellar Door, Secrets And Medicine, Baddies, Locusts, This Is Not A Drill, Baddies and A Fitting End.

Lanterns On The Lake's official website can be found here and they are on Facebook and Twitter. The tour continues at Guildford Boileroom (January 12), Brighton Patterns (13), Exeter Phoenix (14) and Corsham Pound Arts Centre (15).

Email ThisBlogThis!Share to TwitterShare to FacebookShare to Pinterest
Labels: Hector Gannet, Lanterns On The Lake, Wyldest