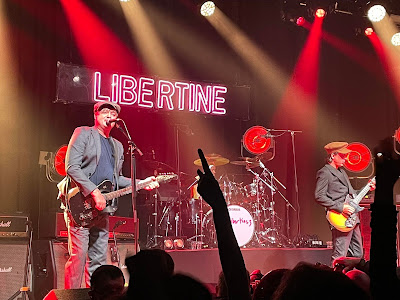 The Libertines' Giddy Up A Ding-Dong Tour rolled into a sold-out and packed to the rafters Manchester Academy on Monday night for an ecstatic celebration of the work of one of the country's most-loved bands playing to an audience of young and old. Support came from Dead Freights, Trampolene and Ed Cosens. 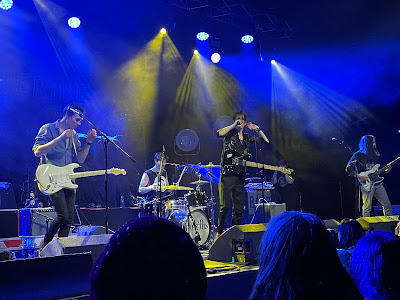 Dead Freights open up the evening, continuing The Libertines' love of promoting bands that might not get the attention they otherwise deserve. They describe themselves tongue-in-cheek as Beatles of Death Metal, Nirvana John Misty. Putting the ABBA in Black Sabbath and Jarvis fronts IDLES and there's a little truth in each of those. Heavy, but with a sense of humour in their lyrics as evidenced in titles like Stutterin' Safari, their recent single and How Much To Call You Daddy, they're a perfect opening act for tonight and a band to keep a close eye on. With Franklin and Charlie sharing vocals, they get a great response from The Libertines' crowd who see a bit of kindred spirit in them. 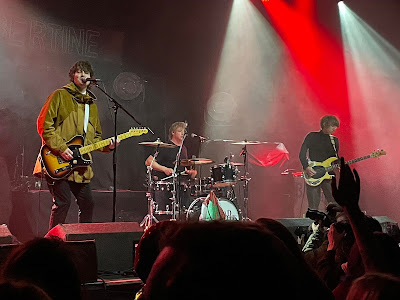 Trampolene definitely are that, Jack having become a member of Pete Doherty's touring band and erstwhile support over the past few years. There's Poundland bags being waved before they've even played a note. He loves Manchester, as he mentions at regular intervals after coming on stage with a sign adorned with the city's bee logo. Trampolene make a ferocious noise, mixing older tracks like You Do Nothing For Me, Alcohol Kiss, Storm Heaven and It's Not Rock And Roll from their debut From Swansea To Hornsey with Shoot The Lights from this year's follow-up Love No Less Than A Queen and Jack's poem Ketamine that the whole front section of the audience seem to recite with him. Always seemingly on the edge of the whole thing collapsing around them and playing with the widest smile on their faces, it's impossible not to warm to their weird and wonderful charms. 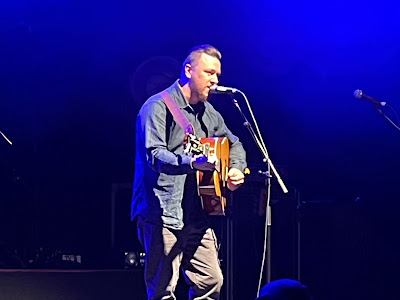 Ed Cosens has the hospital pass. Everything's set up for The Libertines to come on, it's the advertised stage time for them and he comes out armed with just an acoustic guitar to perform three songs to an expectant audience that's had the buzz build up to this moment. His three songs - The River, Madeleine and the title track - all come from his excellent under-the-radar Fortune Favours album that he released earlier this year and he's unfazed by the fact he's stood where the massed throng's heroes should be standing at that moment.
The room erupts though as The Libertines take to the stage and open the evening with What A Waster and the room hardly stops bouncing from front to back until the closing bars of Time For Heroes, dedicated by Pete to Franny Lee, Dennis Law and Johnny Marr, an hour and a half later. Last time they were in town they were at the Arena in front of a five-figure crowd, tonight's show is more intimate, a simple yet powerful light show adds to the experience but allows the focus to be on the music alone rather than the event. 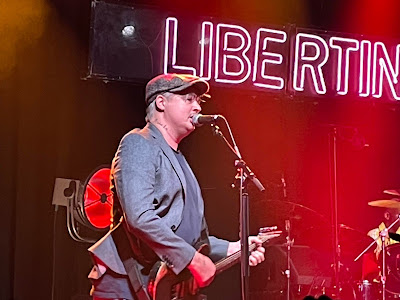 With recently announced Up The Bracket anniversary shows scheduled for next summer, including a show up the road at Castlefield Bowl, it's no surprise that their debut album features heavily in the set tonight alongside the band's eponymous follow-up and its these songs, that defined an era for many of the people in the crowd tonight, that naturally garner the most ecstatic responses. Everyone may be two decades older now than when What A Waster announced them to the world and the likes of Up The Bracket, Time For Heroes and b-side The Delaney made them the spokespeople for a generation of outsiders, but the songs still have the same delirious effect on the moshpit.
It is however very noticeable that a large proportion of the crowd, particularly at the front, clearly weren't of a gig-going or music-buying age when their early records came out and have been since seduced by the legend and the simple qualities of the song and the connections they make. They don't say a great deal, they don't need to as they let their music do their talking for them. 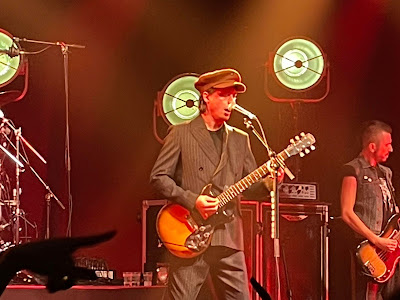