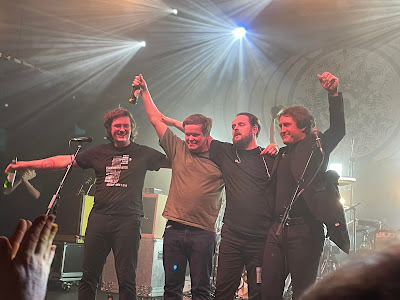 Ist Ist’s much-delayed tour in support of last year’s debut album Architecture and subsequently this year’s follow-up The Art Of Lying concluded with their biggest headline show to date, a triumphant twenty one song homecoming at Manchester Academy 2 on Saturday night supported by Oceans On Mars and Proletariat. 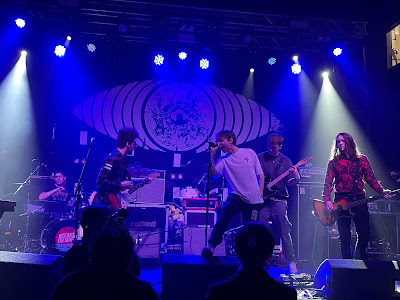 Oceans On Mars are a Manchester five-piece who’ve been around for three years but are new to us. They’re an energetic opening to the evening, showcasing older material like singles Don’t Tell Me Where I Am and Mousetrap and the unreleased Let Me Know and the set highlight Nothing Needs To Change. They refer to songs being personal to them and it very much shows in the way they perform them with intensity, the use of two vocalists adding emphasis and preventing their guitar-heavy sound overwhelming them. The songs are strong enough promisingly to fill the room and draw in a curious audience and are sure to have won them new admirers.
Proletariat are a brave choice of support for this show. They’re very much a band on the rise from the ashes of their first incarnation that disappeared overnight a few years back. Lesser headliners would simply be blown away by them. At the centre is James Cummins, a one man force of nature, a snarling bulldog of a vocalist but with a sensitivity and intelligence to go with it. He’s tweaked the line-up in search of perfection and this four-piece very much match his creative vision and like most bands that trade in guitar-led anthems, live is where you experience them at their very best. 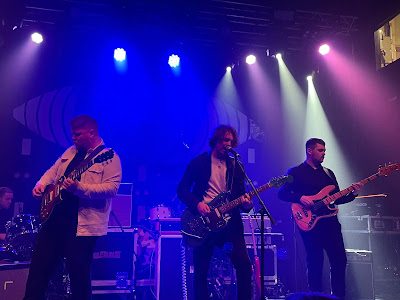 Since they’ve returned they’ve delivered an impressive set of singles, many of which - Go Ahead, Don’t Turn Out The Lights, You’re Free (To Be As We Are) - form part of their half hour set which concludes with an extended Losing Control Is A Beautiful Thing. It’s that final song that shows that Proletariat’s 2021 model is a different beast to the hit-hard-and-run first incarnation of the band and is aiming for something deeper and longer-lasting. That they can do this without losing the energy, the relentless thrill of the headrush is a sign that they appear set for more success.

There’s a real sense of anticipation in the room as Ist Ist take to the stage. Deprived of this show as a celebration of Architecture being a top five independent album last May, tonight looks back at that but with The Art Of Lying breaking into the Top 100 as a unsigned independent self-funded band it also serves as an example to all aspiring bands that you can succeed without the industry machinery and covert handshakes and deals that dictate online and radio playlists if you’re willing to put the hard miles in. And of course, if you’re good enough. 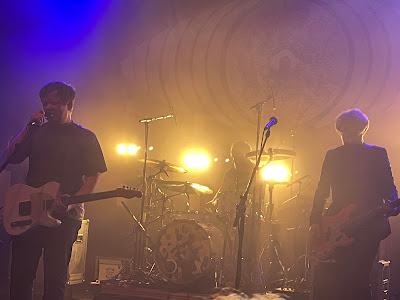 What Ist Ist prove to any lingering doubters is that they are. They discard any comparisons with this city’s great bands of the past to the dustbin where they belong, leaving anyone clinging to them looking as incoherent as a Johnson press conference. This is rock music at its most powerful and potent. Songs like Night’s Arm, I’m Not Here, Extreme Greed and Black build with an unstoppable surging momentum, the sort that sets the pulses racing, the heart beating faster and the feet moving involuntarily. Others like New Love Song, Under Your Skin and Preacher’s Warning take a more subtle approach although the brooding menace that powers them is very much in plain sight.
Heads On Spikes, which finishes the main set, straddles both camps with an assuredness that comes from the band’s belief in all their songs not just the radio-friendly singles that lesser contemporaries spend their time trying to create. The Waves and the final track of the night Slowly We Escape tread that same path but making new footprints as they go. In fact tonight it’s often the dark horses in the set that are the most thrilling. Early EP track Emily, a survivor like Night’s Arm from their very early incarnation as a three-piece, has its bassline sung back at them with a gusto that takes them aback. If It Tastes Like Wine, the most sonically diverse track on The Art Of Lying, has Adam screaming violently at the top of his lungs, completely lost in the moment. 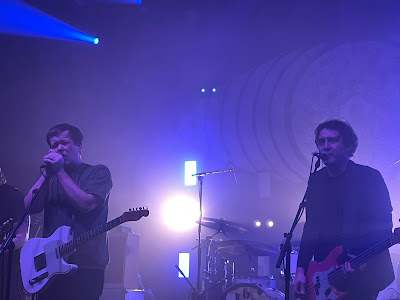 “You might not be able to tell from my face, but I’m having a good time” Adam tells us deadpan before adding “it’s great to be up here with all my best mates” then pausing before finishing the sentence with “and Andy”. It’s a sentence that betrays why Ist Ist have become such a phenomenal live band.
They have a connection that bands can only usually achieve when there’s a deep unbreakable bond of trust and friendship. Andy, almost overwhelmed by emotion, thanks us for making four guys who started this seven years ago very happy but this is all down to them. There’s an absolute confidence they have in what they’re doing, boosted by sold out signs across the country the last two weeks and the chart position of The Art Of Lying, and this is so very evident in the way they let loose and make this seem so effortlessly life-affirming. 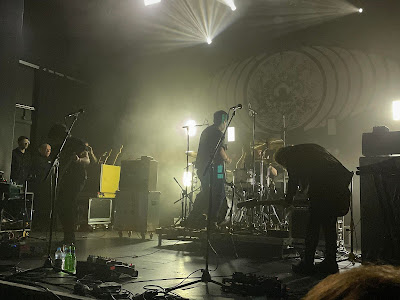 We’ve seen bands thrust into bigger venues sink under the weight of expectation and the enormity of the stage they’re on. Ist Ist thrive though, expanding their sound and performance as well as the critical set-up and infrastructure around them that oftens goes unattended to. They are very much a band on the brink of something truly special, armed with two potent albums plus tracks from their early EPs that allow a set of this length without any drop in quality. They perfectly pace and order the set to ensure maximum impact. They turn the often soulless box of Academy 2 into a celebration of the fierce independent spirit on which this city was built and which like the music that soundtracked is under increasing threat from the bland money men.
Ist Ist played Wolves, Fat Cats Drown In Milk, Watching You Watching Me, Middle Distance, Night's Arm, Discipline, New Love Song, Emily, Under Your Skin, Preacher's Warning, I'm Not Here, Fools Paradise, If It Tastes Like Wine, Listening Through The Walls, The Waves, Heads On Spikes, Extreme Greed, It Stops Where It Starts, You're Mine, Black and Slowly We Escape.