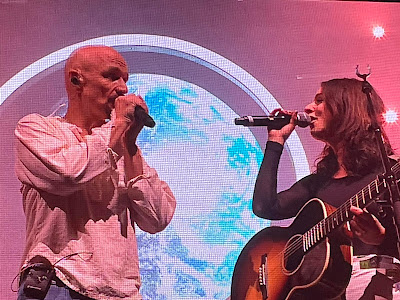 James concluded their UK tour at Wembley Arena on Saturday night. With a career-spanning set James once again defied those who wish them to be a greatest hits machine with something more cerebral that demands attention yet is ultimately far more rewarding.
James open the set, as they have most nights on the tour, with Zero, the opening track from All The Colours Of You. Its opening line of "we're all gonna die" captures in so many ways what we've all gone through in the last eighteen months as our own mortality has always been on our shoulder with the fear of the unknown. Zero's message though, like the title track of their previous album Extraordinary Times, is to "live to your shine, don't live unfulfilled" - live in the moment like it's your last. For a band in their late fifties and early sixties, except for Debbie and Chloe, it feels symbolic and important because they won't be able to go on for ever, but James are an adaptive beast. There's moments where Andy, Chloe and Jim take over the lead vocals, the latter subtly on Tomorrow, which gives the songs new leases of life, but at the same time also take the pressure off Tim. It's a win-win. 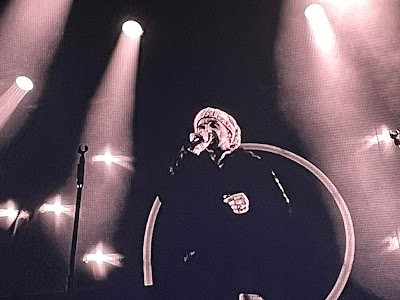 Isabella, like All The Colours Of You and Beautiful Beaches later in the set, show that James still have it in them to produce ecstatic head rushes that masquerade as songs. The interaction between Tim and Chloe is absolutely critical to this iteration of James, Chloe taking on the role of ten thousand people in front of her with whom Tim has made a connection with by physically being among us in recent years giving the front man a lightning rod to react to before heading off to the fringes of the stage front or to his other band mates.
The whole place erupts when James play their big singles of course. She's A Star and Born Of Frustration get huge roars of recognition from the first notes and get sung, with some interesting takes on the lyrics from the people around us, with gusto and with an alcoholic haze of reminiscence. Later on, Sit Down, Come Home, Getting Away With It (All Messed Up) and Laid all have that same celebratory impact but there's a wild journey to go on first. 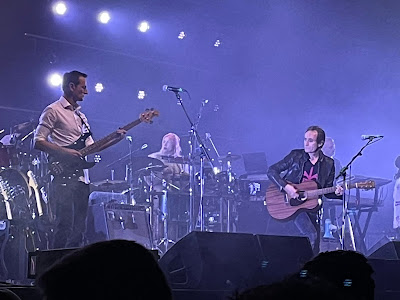 Tim precedes All The Colours Of You, a brave song that addresses head on the emergence in clear sight of a fascist-leaning movement in mainstream politics in the US and to an extent here too, with a heartfelt rant about the injustices that racism creates. It's too much for two men in front of us, who look like relics from a dim and distant past, who decide they're not going "listen to this shit" and leave. They'd have choked on their beer and venom had they stayed for the Many Faces segue with the message "there's only one human race, many faces, everybody belongs here."
We're then taken on a magical mystery tour through James' back catalogue stopping off in 1990, 1994, 1997, 2008, 2016 and 2014 without pausing for breath in the middle section of the set. If you weren't au fait with James' body of work, you might be forgiven for thinking that this was a set of new songs such is the way James have adapted them to retain their freshness and vigour. They also improvise in most of these songs, very small subtle differences that you won't notice if you come for one night, but which are very evident if you do multiple nights of a tour as so many do with this band. 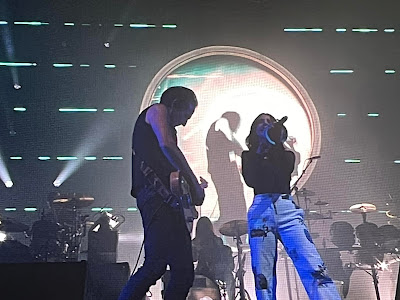 Tomorrow is life-affirming, life-saving, a song of hope against adversity, a theme that has never been too far from the surface in much of their work but is in plain sight here. I Wanna Go Home feels almost like a meditation, particularly when Tim holds a note for over a minute and it seems like a lifetime. That section starts with Gold Mother and ends with Walk Like You, two songs born of the same parents but a generation apart, but impossible to determine whether it's a parental or a sibling relationship. Tim says we should have known we had a tricky band on our hands in 1989 when they were singing about child birth and baby shit. Those of us who've been there that long knew, and it's why we're still here.
Hymn From A Village takes us all the way back to 1985 yet it shows no signs of its birthmarks or age, as fresh and vibrant as it's ever been, with the energy of a band that's in its first throes of life and in many ways this is where the nine-piece James are right now, discovering the possibilities of the expanded line-up, in this instance the power that two drummers bring. Walk Like You and Curse Curse come from 2014's La Petite Mort, the only point other than the start and end of the main set that two songs from the same album sit together. The latter has blossomed more than most songs with the new life that's been breathed into James, the dropdown where Chloe takes over the vocals meaning the build to the final chorus is even more powerful and unstoppable, and when combined with a stunning lighting set up feels like an explosion when it finally hits. 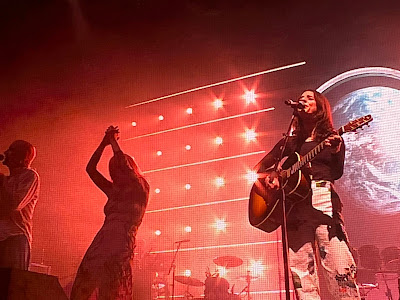 The last half an hour of the set is where the big hitters lie and those that haven't joined them on the journey hop on board. Come Home is ragged, raw and all the better for it, Sit Down is a celebration of not fitting in and of unity that stills rings as true then as it did back in 1989. Sound takes us on a magical mystery tour down the rabbit hole of James, winding, twisting before finding its way to the surface. Beautiful Beaches, the most instant moment on All The Colours Of You, has steadfastly refused to be budged from more vaunted company, testament to James' ability to still generate anthems with the ability to fill arenas when many have written them off. The night finishes with Getting Away With It (All Messed Up), a title that has become their way of living, and a delirious stomp through Laid and, fifteen minutes after curfew, sends the crowd streaming out into the cold London night singing the not-played Sometimes.
Saturday could have been the Morning After The Night Before, to coin the title of James' 2010 mini-albums given the exhilarating triumph of the previous night in Manchester and the end-of-tour feeling that comes at the end of a gruelling week and a half with long journeys and the spectre of constantly being on their guard against exposure to COVID risk that might grind the tour to a halt. And whilst the show didn't quite hit the heights of the Manchester show, it still was a powerful way to end a tour that has seen the expanded nine-piece James take on arenas with a set to challenge the more casual fan and delight the harder core fans who appreciate James' willingness to take on old favourites or hidden gems from their back catalogue and breathe new life into them. Nearly forty years into the existence, James are continuing to find ways to evolve. In many ways they're still that unique awkward defiant band that refused to play by the normal rules of the music business and the how to be a band handbook, turning left when the green light is telling them to go straight on, picking up new drivers and passengers en route.
James played Zero, Isabella, She's A Star, Born Of Frustration, All The Colours Of You, Many Faces, Gold Mother, Honest Joe, Tomorrow, I Wanna Go Home, Nothing But Love, Interrogation, Hymn From A Village, Walk Like You, Curse Curse, Wherever It Takes Us, Come Home, Sit Down, Sound, Beautiful Beaches, Getting Away With It (All Messed Up) and Laid.