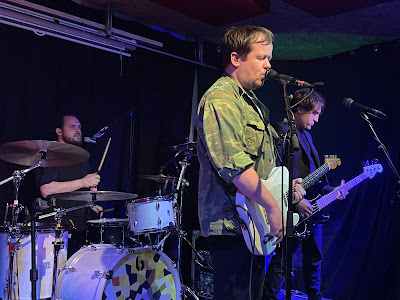 Ist Ist continued their long-delayed tour in support of their debut album Architecture and its top 100 follow-up The Art Of Lying with a sold-out show in the intimate basement of Hyde Park Book Club in Leeds supported by Skipton's Paid By Cash with a seventeen song set that showcased both albums as well as selected tracks from their early EPs.
Paid By Cash are an impressive opening act that go down a storm with the already full room. The Skipton four-piece have gone through a few recent line-up changes, but this line-up appears to have gelled very quickly and with their traditional vocals / two guitars / bass / drums set-up. They've already dropped two of the four songs from their demo they released earlier this year and the quality of the newer material in the set certainly demonstrates the progression they've made as they take time out from recording their debut EP for this show. 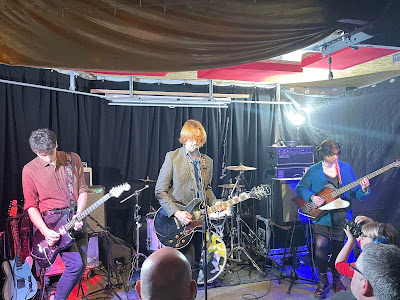 Bleeding Out opens proceedings and like Louder Louder that follows, it shows they've got the ability to craft songs that build momentum through the verses and explode into life in the chorus. The audience are clapping along in the breakdown to the latter, something that happens again later in the set, despite many of them hearing the song for the first time. The quality doesn't drop during the seven songs; even their brave choice of covering Joy Division's Ceremony remains true to the original yet their rhythm section puts their own stamp on it too, especially the bass line.
Their final trio of originals, modestly apologised for - Sirens In The Sea, Fight Of A Lifetime and In Memory - are the strongest three songs in the set and showcase some of the possibilities that might ensue as they develop their sound. Where many nascent band's sets tend to be repetition of a theme, Paid For Cash have far more variety going on. The rhythm section is tight and claustrophobic, adding drama to the songs, while the guitars are allowed to let loose and duel with the vocals for pole position.
The Art Of Lying piercing the top 100 album chart might not seem to be a big deal as there's a raft of indie bands securing higher chart positions, but they're backed by labels, radio, big promoters and other connections. Ist Ist have built their base independently, off the radar of the self-appointed tastemakers, filling rooms in Manchester and then spreading their wings further afield to the point that this tour of the country is pretty much sold out by word of mouth and, of course, the undeniable quality of their art rather than double-figure formats of albums, crap memes and well-placed support slots. 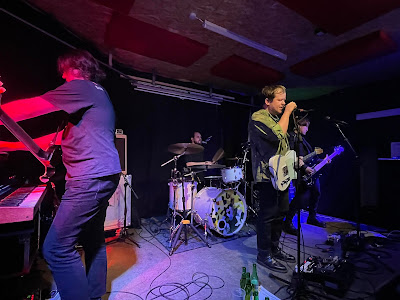 Their focus is very much the music - they're on stage less than seventy minutes and work through seventeen songs with very little fuss or show, allowing their music to do their talking for them. Crisp and clinical without compromising on the dark emotional qualities of the music and the power of Adam Houghton's dark introspective vocals which have developed over time from the angry young man of their early recordings to a lightning rod for the uncertainties, insecurities and mental health questions that many of us face. There's moments of light though - Black and Extreme Greed, to name just two, possess a potent uplifting quality that lifts the listener up on an unstoppable wave that starts in the verses and by the time they hit the chorus is overwhelming.
The sound in the basement of Hyde Park Book Club is excellent and it allows the real separation in these songs to be heard, the intricate subtleties in Mat Peters' keyboard work, the edge in his guitar work, the detail in Andy Keating's bass and at the centre of it the powerful and punishing drumming of Joel that provides the imposing framework for these songs. There's moments when they slow things down - Preacher's Warning, from their debut EP, is more brooding and imposing than it's ever sounded, Wolves and Listening Through The Walls, the opening tracks on Architecture and The Art Of Lying respectively, build with a menacing intensity. 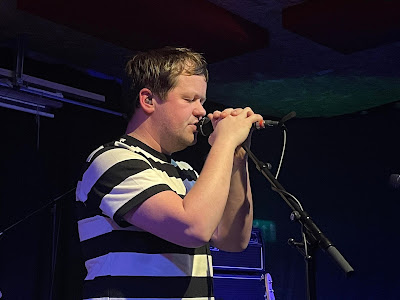 There's moments where they let loose too. Fat Cats Drown In Milk and It Stops Where It Starts, two of the highlights of The Art Of Lying, feel like they're being driven by a centrifugal force that starts within the band and by the end of the song has pulled everyone in. If It Tastes Like Wine, a more experimental moment on the album, has a particular edge to it that is hopefully a pointer for the future direction of the band. They finish on Architecture's final track Slowly We Escape which captures pretty much everything that's special about Ist Ist in six and a half minutes, one minute tense, on the precipice of explosion, the next lost in a wall of noise but without losing control of the impact they are having on the audience.
The momentum behind Ist Ist is starting to build to a point where they won't be able to be ignored for much longer. Outselling more celebrated contemporaries with machines behind them they go for direct connections both in their music and their interaction with their growing fan base. Selling out shows like this, and their ones at circuit venues like the Louisiana in Bristol, the Monarch in London and the Trades Club in Hebden Bridge, are significant statements, but there's none greater than if you stand in the room and witness them in their most natural environment.
Ist Ist played Wolves, Watching You Watching Me, Fat Cats Drown In Milk, Middle Distance, Night's Arm, Discipline, Preacher's Warning, I'm Not Here, Extreme Greed, If It Tastes Like Wine, The Waves, Listening Through The Walls, It Stops Where It Starts, Heads On Spikes, You're Mine, Black and Slowly We Escape.