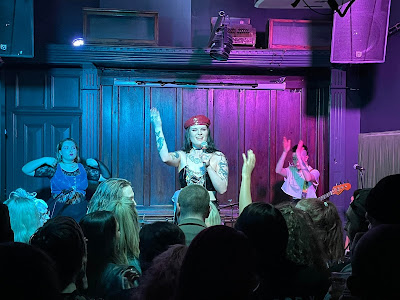 The Red Stains played their final show of 2021 at their Jump The Met night at a sold out Castle Hotel in Manchester on Thursday night supported by two other up-and-coming Manchester-based bands Pyncher and The Strangerz on the strongest small venue bill we've seen this year.
The Strangerz originally hailed from Doncaster but are now based in Manchester. Featuring twins Martha on vocals and Tom on guitars, Shan on drums and new member Will on bass, they're an impressive opening act. Musically powerful, their eight-song set with their only single to date Straight Gay Brother, all eighty-three seconds of it, featuring two songs in, they very much demonstrate their potential to grow and fill rooms many times the size of this. Despite the vocals not being high enough in the mix, it's very clear that Martha is already a front woman to be reckoned with, both in her singing, but also in her stage presence and her band accomplished musicians who give her the space and the energy within the songs to fluorish. Half way through the set they hand out handmade fanzines - an instant win for us, a band that very much understands the DIY ethic. 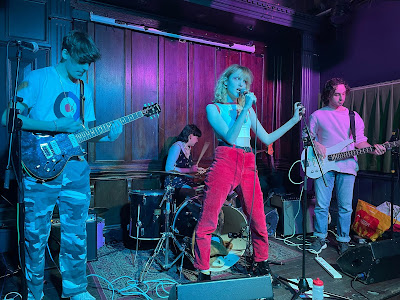 For a band with just one single to their name, they've already got an impressive repertoire too, blasting through eight songs in just over twenty minutes, leaving the already full crowd feeling a little breathless, including the other bands who all watched each other rather than chatting with their mates or hiding upstairs, which should be the norm but not always is. A particular highlight is a song called Shut Up where Martha screams down the mic while delivering a simple riposte to someone who won't stop talking about themselves, but their quality never really drops throughout. They're very much one to keep an eye on.
For a band without a single release to their name yet Pyncher have been very prolific in gigging since restrictions have been lifted and it shows in the most polished and confident performance of the three bands tonight. It's clear there's a very intuitive relationship between Sam, Harvey, Brittany and Jack up on stage as they run through a set of songs that already feel like they've got the making of a strong debut EP or album to come. That relentless gigging has also got them a decent fanbase and a sense of curiosity about them as the room is once again full and stays full for the duration of their set. 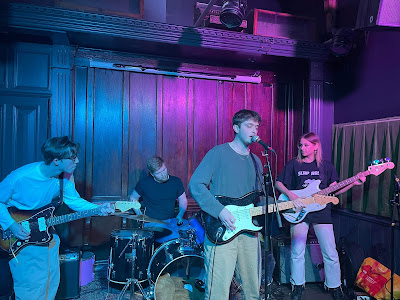 They finish with their single Dirty Feet which is a good representation of and introduction to the core elements of their sound whilst The Saddest Man Around and Frogs And Tomatoes show that they're already exploring how to develop their songwriting and performance to both have an identity but also to swerve the often-travelled paths of new bands aping their influences or repeating a formula.
With Cesca now fully integrated into the band, The Red Stains feel and sound much more coherent as a band without losing the chaotic nature of their early shows, making them a really stand out band on the Manchester scene right now. With Natalie at the helm, there's a sense of unpredictability about them still as she very much goes with the flow of the gig, whilst the rhythm section of Sterling on bass and Ben on drums provide the increasingly tight platform that allows Cesca's electronic wizardry on keys to work its magic over the top. A new song called Cashing Out, about having no money and being chased by bailiffs, is debuted and both fits The Red Stains' mould as well as showing the possibilities for the future.
Before Mannequin, a song about objectification, a subject she's spoken regularly about on social media, Natalie asks the men to stand back and allow the women and anyone who identifies as one to move forward and everyone obliges. There's also a touching moment where she dedicates Jump The Met to their friend Billy who passed away recently. Inclusivity is very much a theme with the band, if they weren't up on the stage they'd be in the crowd with us. In fact, Natalie spends most of the second half of the set there, lost in the music and the atmosphere that her band have created in the short forty minutes they're on stage. They finish with a cover of Madonna's Material Girl that veers so far away from the original it almost meets it on the other side. 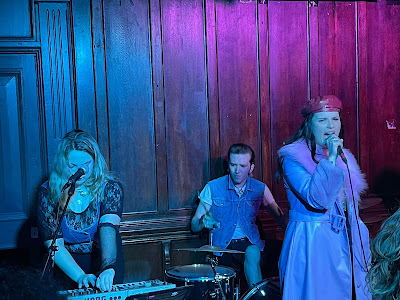 Tonight felt like a coming of age for The Red Stains. The sold out signs on the door, their longest set to date, the mosh pit and the noticeable shift in the audience from the older crowd that attend small gigs around town to a younger more energetic audience. Musically they're continuing to develop at a pace, Natalie is becoming a more confident and iconic leader of the band with every show as they find their identity and place in the scene ahead of spreading their wings outside the city in 2022. Purists might detest them, if they deigned to watch them, but then purists are no fun.

Pyncher are on Facebook and Twitter. They play Manchester Aatma on December 8th and Night And Day Cafe on 15th.

Email ThisBlogThis!Share to TwitterShare to FacebookShare to Pinterest
Labels: Pyncher, The Red Stains, The Strangerz