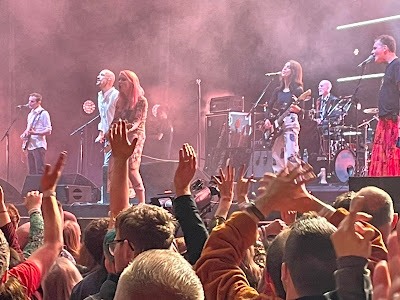 James and Happy Mondays played triumphant sets at their homecoming show on Friday night at the cavernous AO Arena that both bands made feel intimate and celebratory in different ways. Happy Mondays delivered a set of their most well-known material whilst James played a stunning set that felt like a magical mystery tour through their extraordinary back catalogue.

Happy Mondays are on top form tonight, clearly buzzing at being back in Manchester where everything started for them and where they all still hold iconic status whatever trials and tribulations they've gone through. It clearly inspires them and Shaun is on his best behaviour as well and his vocals are the strongest they've been on the tour so far, particularly on a rampant 24 Hour Party People in the middle of their fifty-minute set.

Rowetta and Bez prowl the stage, feeding off each other, providing the energy and visual spectacle to accompany some of the most important songs from this city in the generation that lived through the Madchester phenomenon that the Mondays christened with their 1989 EP, from which Hallelujah was the lead track and just as exultant tonight as it's ever sounded. There's a touching moment where Rowetta dedicates Step On to 808 State's Andy Barker who passed recently. The final eight minute WFL feels like it's seconds away from falling horribly apart at any time during the song, but it's that thrill that makes Happy Mondays such an exciting live band when they're on it (and the opposite when they have a bad night).

James are on fire right now. In the summer Tim Booth promised that these shows would be spectacular as the new nine-headed James beast found its feet and came out of its shell and they're delivering on that bold promise and then some. The setlist might be light on some of the old crowd favourites, although Sit Down, Laid, Sound, She's A Star, Born Of Frustration, Getting Away With It (All Messed Up) and Come Home, arguably their seven best-known songs are all present and correct here, but if you were to design a setlist to capture the phenomenal energy that this band can generate, it would pretty much look like tonight's. 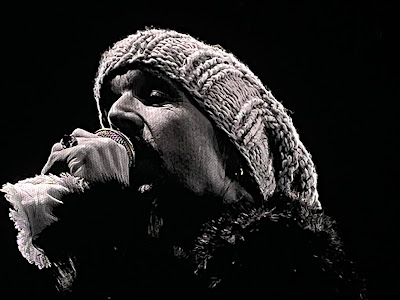 It has everything in it. Hymn From A Village was written as far back as 1982, described alongside Maria's Party by Tim as "our punky songs", the latter a song performed regularly in 1992 but never getting a full recorded release. Where mere mortal bands may surprise fans with an old album track rather than predictable older hits from time to time, James go further and actively seek out songs to resurrect and reinvent that had fallen by the wayside but which demand revisiting.

Honest Joe, from their experimental Wah Wah album, might be unknown to many, but it's enough ideas in its six minutes than you'll get in many albums, and with a fabulous light show to boot, megaphone vocals and backing vocals, soaring violin, booming bass and Adrian's exquisite guitar lines. Gold Mother, resurrected after a decade away, survives a false start when Tim owns up to being in the wrong key, to become a rambling monster of a song focused on the bravery of childbirth and referencing baby shit. Tim comments at the end on James not being one of the biggest bands in the world because they take risks and don't do the predictable thing and follow their own path and tonight's set is a demonstration of that. Some will complain it's not a greatest hits set, but the arena has sold out the last three times James played here and they make it very clear what type of performance you're going to get and people continue to come back to them. 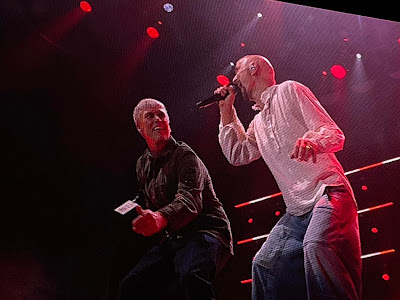 Come Home sees Bez join them, the mutual respect between him and Tim very clear to see as the two of them stand atop monitors and dance in their own unique individual ways whilst Debbie acts as the instigator for the crowd, demanding us to immerse ourselves still further than we already are in the music. Before it Tim references the Mondays' influence on them when they toured together way back in 1988. The crowd lose themselves in the song, as they do earlier when the duo of She's A Star and Born Of Frustration are combined after the opening two tracks Zero and a particularly fierce Isabella.

What's clear is the energy that the new songs infuse into the older ones in a way that has always happened with James to some extent, but which feels more palpable and exciting than ever. All The Colours Of You with its segue into Many Faces and Beautiful Beaches in particular feel like the absolute equal of anything else they play (or don't) tonight in conveying the spirit and energy that's at the very core of this band; the things that keep them fresh and existing forty years in, so different yet so similar in many ways to the four young men who rehearsed in kitchens and scout huts.

The selection of songs - Walk Like You, Curse Curse and Interrogation, all tellingly from the La Petite Mort album, Honest Joe, Maria's Party - are brave ones in a crowd that's bigger than first week album sales have been for many years now. Any curmudgeons who still just want the hits and nothing else, and there's a few of them floating around, are sent out of the door happy though at the end as they deliver a final run of crowd pleasers. 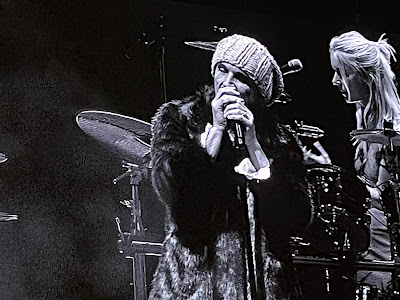 Sit Down is introduced as a song with particular poignancy to Tim given that he sang it to his father-in-law by video call at the start of COVID just before he passed. The crowd sing the first verse and chorus back to them and you sense we'd still be there now singing the chorus at the end had they not then jumped into a magical Sound and its wonderful extended breakdown that completes the main set. A trio of Getting Away With It (All Messed Up), Laid and Sometimes conclude the night with everyone from the front rows to the very back of the distant second tier up on their feet and the grins on stage as wide as the eighteen thousand in front of them. Sometimes is after curfew, Tim says they're not going anywhere though despite the £25,000 fine they get for breaching the 11pm limit.

Manchester Arena can be a soulless box of a venue at times, tonight James made it feel like The Ritz or Apollo. Tim references wanting to come down into the audience as was his wont pre-COVID, but conversely the connection feels stronger with him up on stage as if it's helped to reinvigorate connectivity within the band. With both Debbie and Chloe there too breathing new life into them, James are as exciting, thrilling and vibrant as they've ever been. They look like they're enjoying this more than they've ever done and that transmits itself to us all. In recent years James have often saved their best performance on a tour for Manchester after years of it being an anti-climax because of the pressure of the location and the history with their hometown and tonight's show was no exception, ranking up there with the very finest we've seen them.

James played Zero, Isabella, She's A Star, Born Of Frustration, All The Colours Of You, Many Faces, Gold Mother, Come Home, Honest Joe, Seven, Interrogation, Maria's Party, Hymn From A Village, Walk Like You, Nothing But Love, Curse Curse, Wherever It Takes Us, Sit Down, Sound, Beautiful Beaches, Getting Away With It (All Messed Up), Laid and Sometimes.