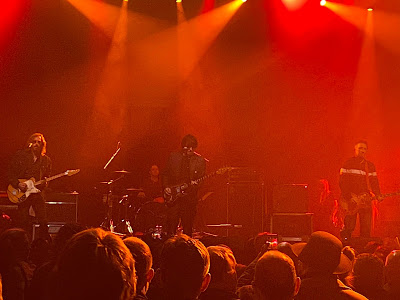 The Chameleons brought their traditional Christmas shows back to Manchester Ritz after last year's enforced absence with two nights entitled Home Is Where The Heart Is 2021 / Nostalgia 81:21 as a celebration of forty years of the band's existence. We caught the triumphant second night supported by Salvation and Ist Ist as they reminded us just why they're one of the most-loved if underacknowledged bands to come from the city. 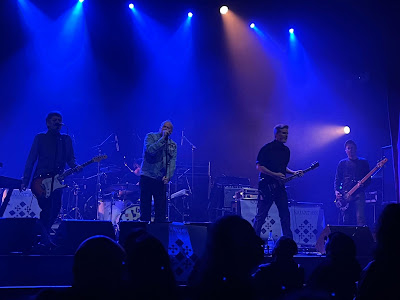 Salvation from Leeds open up proceedings and draw the crowd onto The Ritz's sprung dancefloor with a set of songs from their eighties punk days. Front man Danny is an energetic presence and there's a very evident love and buzz that they transmit from the stage to the audience that very much fits with the vibe of the evening and why they're a popular choice of opener both tonight and recently for The Mission. They're past masters at enlivening people not there specifically to watch them and they do this successfully for their half-hour set, no more so than when they play crowd favourite Thunderbird and offer everyone specially decanted sampling bottles of it rather than their traditional pass-round of the bigger bottle.
Ist Ist probably don't want 2021 to end, but they go into 2022 as a band on the brink of making a substantial impact both here at home and further afield. Breaking the top 100 with a self-released album, selling out some of the most important circuit venues hundreds of miles from home and gathering international attention, they finish their year with a triumphant main support slot that has the growing crowd shouting their praises. It's to The Chameleons credit too that they've put on both Ist Ist and bdrmm the previous night, giving two emerging bands access to their fanbase.
Their forty-five minute set picks out the highlights of both their albums - 2020's Architecture and this year's The Art Of Lying - and bulks them out to fill out this space, which surely must be the location for their own next Manchester headline. Guitars are turned up to the max and the quieter songs are left for another day once The Art Of Lying's opener Wolves has started the set. 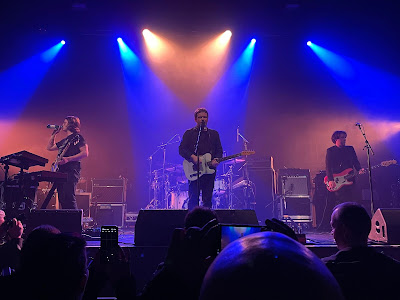 Tracks like Watching You Watching Me and The Waves have been beefed up with Mat's second guitar to create a phenomenally powerful sound - and the lead tracks from the albums, It Stops Where It Starts, Extreme Greed, Black, Discipline, You're Mine - are all present and imposingly impressive and The Chameleons' crowd, a knowledgeable bunch, give them the response they richly deserve at the end of a ferocious Slowly We Escape that ends the set.
The Ritz has filled up a little more for the headliners and over the course of ninety minutes, The Chameleons remind us why they create such devotion within their fanbase. Even though they might not be eulogised like many of their Mancunian contemporaries over the past forty years of their existence, try telling that to the tribe, as Mark Burgess refers to them, and the numbers that have been unable to travel because of the strange times we find ourselves living in. This is a band that holds a special place in the hearts, minds and music collections of the thousand or so gathered in the Ritz. There's a poignant moment where he dedicates Tears to ex-Ritz DJ John Gannon and to anyone who's no longer with us tonight.
The Chameleons have been doing these annual Christmas shows for seven years now, expanding to two nights this year to meet demand. A look around the audience suggests that they're still finding new fans from those not young enough to catch them in their prime as well as continuing to be the favourite band of many of the people in the room for whom this is a pilgrimage.
What's unequivocally proven is that whilst The Chameleons might not have received the acclaim of their contemporaries, they have songs to match them and tonight is a roll call of many of them. They're delivered with little fuss or fanfare, although Mark jokes about a third in that he's not saying much and not being rude because they got lassoed at curfew the night before and were unable to play an encore. Although there's snippets of Joy Division and The Beatles dropped in and they finish with a cover of The Damned's New Rose, the songs themselves that are the stars of the show. Soul In Isolation feels like it could go on forever, and the likelihood is that no one in the room would mind, while Singing Rule Britannia (While The Walls Close In) feels quite apposite. 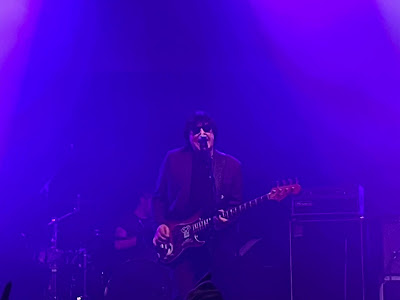 The band are incredibly tight, original frontman Mark Burgess and guitarist Reg Smithies augmented by Neil Dwerryhouse on guitar, Danny Ashberry on keys and Stephen Rice on drums, the latter with the unenviable task of filling the shoes of the late and great John Lever. Mark asks whether they're adequately demonstrating forty years of songwriting to an almost deafening roar and tells us that he feels like he's floating such is the response they're getting from the audience when they were unsure whether anyone would turn up in the difficult circumstances.
Nostalgia is often a bad thing; people clinging to three or four songs that soundtracked a specific time in their life and those shows tend to drift until those songs are played, usually at the end of the set. The Chameleons shows feel different, there's a bond between artist and audience that often isn't there. Each song feels as important as the next one - and it doesn't matter whether it's the best known ones or not, every one has arms in the air, singing along at the tops of their voices like there's a secret society going on.
Salvation's website can be found here and they are on Facebook and Twitter.

Ist Ist are on Facebook and Twitter. The Art Of Lying was released on November 26 on black and cobalt blue vinyl, limited edition 2 disc vinyl with demos, CD and cassette and can be ordered via their website.