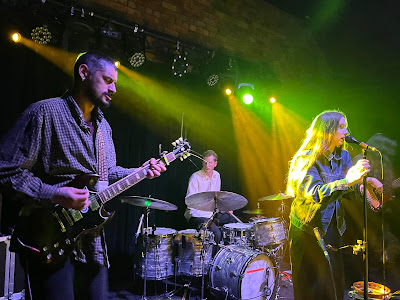 Dry Cleaning continued their short run of intimate shows around the UK with a packed out night at Hebden Bridge Trades Club on Wednesday night featuring songs from their debut album Long Leg that's featured highly on most album of the year polls and from their Sweet Princess and Boundary Road Snacks And Drinks EPs. Support came from a solo slot from Garden Centre.
Garden Centre tonight is Max playing a solo set of songs. The striking lyrics that jump out of us are one about standing next to someone in the urinals who starts talking to you and putting you off and a reference to putting a turd in a plastic sandwich bag. It's indicative of how you might react to Garden Centre. There's chatter at the back from those who this might be a bit too weird for, because it hasn't been played on 6 Music where the headliners have been on heavy rotation all year, but there's something about these songs of alienation and not fitting in, sung in a voice that would definitely be marmite for many switching between guitar, keys, acapella and recorded backings that's quite fascinating.
The room is full for Dry Cleaning. It's the first show we've been to since restrictions were lifted where we haven't noticed the gap of no-shows. With a sold-out in minutes Academy 2 show in Manchester and a follow-up at the Ritz announced, this 200 capacity show feels like a last chance to see them in such surroundings, yet it also feels like their natural home musically. It'll be interesting to see how Florence's half-spoken half-sung vocals that often have to fight to be heard over the sound of her band mates translates to those halls, but tonight it feels like she's talking to each and every one of us in turn with these wonderful, if slightly left of centre, tales.
The set covers both New Long Leg from which they take seven of the songs as well as their two early EPs that announced them to the world. Conversation and Magic Of Meghan from their debut Sweet Princess and the set opener Sit Down Meal and Viking Hair (described by Florence as one of their favourites) from its follow-up Boundary Road Snacks And Drinks.
Whilst much of the attention has been focused on Florence's vocals, it'd be very remiss to not acknowledge the genesis of the band was in them producing instrumental music before they found the perfect accompaniment to it. The contrast between some of the extravagant riffs from Tom's guitar and Lewis's bass in the likes of More Big Birds and Magic Of Meghan and the vocals is what makes Dry Cleaning quite so thrilling - neither would have the same impact without the other, it's the contrast that makes them such a unique proposition that draws you in. 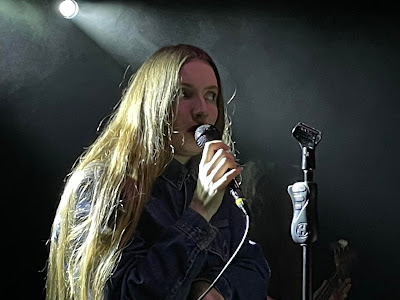 It is of course Florence's delivery that grabs the attention - her facial expressions as she delivers deadpan mysterious stories are captivating, particularly when contrasted to her witty ad-libs like asking Lewis if all the beers placed on the front of the stage are his. One minute she looks completely intimidated by where she is and what's she's doing, grabbing onto the mic stand or a tape player for dear life, the next she's delivering quick fire lyrics that resonate around the room, no more so than on their breakthrough single Scratchcard Lanyard which brings the fifty-minute set to a close.
We learn little new about Dry Cleaning tonight, but get reaffirmation of the fact that they've made one of the best albums of the year and made a breakthrough without having to compromise their integrity or sound to do so. Compelling to watch as well as to listen to, where they go next will be intriguing to see, but for now Dry Cleaning are one of the most interesting bands around.
Dry Cleaning played Sit Down Meal, Unsmart Lady, Strong Feelings, Her Hippo, New Long Leg, Viking Hair, Leafy, More Big Birds, Magic Of Meghan, Conversation and Scratchcard Lanyard.
Dry Cleaning's website can be found here and they are on Facebook and Twitter.
Garden Centre are on Twitter.
________________________________