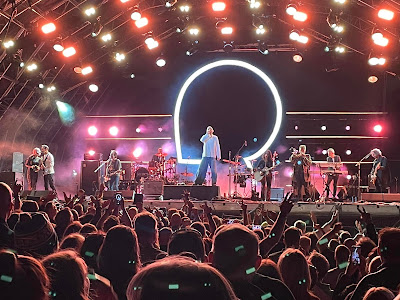 James headlined the opening night of Heritage Live's series of shows at Kenwood House in London on Friday night supported by The Charlatans, Maximo Park and Get Cape Wear Cape Fly with a triumphant set mixing old and new in a picturesque setting in the capital.

The scene at Kenwood House is a bit of a mess when we arrive an hour and a half after doors. We'd have missed Cruel Hearts Club in any case, but they hadn't played and neither did The Sherlocks and the crowd are being held in the area furthest away from the stage because parts of the build were still in progress. Fortunately the crowd were very patient and good-natured and the staff that were on hand, although light on numbers and as informed as the rest of us as to what were going on, were polite and as helpful as they could be so any trouble was averted. And whilst the organisers probably should be doing better - it's a reminder of the supply chain issues facing the industry right now - the European workforce made to feel unwelcome and the local one being told to find "proper jobs" by the same bunch of arseholes who haven't come back when things opened up again. Get Cape Wear Cape Fly did decide once the stage was ready to play and we had the bizarre situation of the audience being in the distance for most of their set. 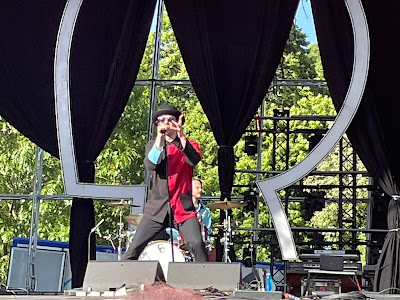 Maximo Park take to the stage and things are running back on track and they deliver a forty minute set of what Maximo Park do best. They have the problem that other bands of their age face - an audience that want to hear the songs from yesteryear whilst the band themselves want to play their most recent material which is often as strong but not graced with the benefit of radio play in days when the market wasn't as saturated and where the singles chart meant what people went out and physically bought singles. Their latest single Great Art is a case in point. They do find a good balance though, and with Paul Smith at their helm, they engage with the early evening audience mixing newer tracks like Baby, Sleep from last year's excellent Nature Always Wins album with older favourites Our Velocity and the final song Apply Some Pressure. 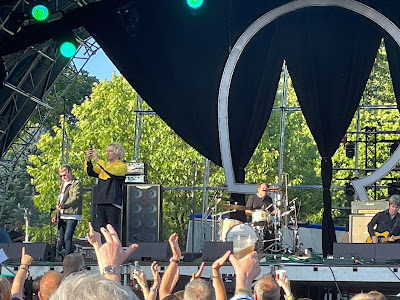 The Charlatans are next up, continuing their summer of playing second on the bill at events like this when in reality they have the fan base and the catalogue (thirty two years and counting of it) to fill the headline slots. They take a more pragmatic approach to their setlist and focus pretty much entirely on their commercial peaks - The Only One I Know, Then, Telling Stories, Just When You're Thinking Things Over, Can't Get Out Of Bed, Weirdo, One To Another, You're So Pretty We're So Pretty, North Country Boy and How High amongst others form an impressive roll call of a setlist that concludes, as is tradition, with a stretched out Sproston Green, or "Break On Through To The Other Side" as Tim Burgess describes it.
Tim acts as the leader of the dance throughout, prowling the stage, camera phone in hand, arms raised in a fetching yellow jacket he tells us was worn in the How High video, encouraging the reticent to let themselves go and join in which most around us need little invitation to do as it's practically impossible to not be drawn in by his infectious energy and the familiar warm sounds that his band mates create that defined the younger more hedonistic years of many in the audience. 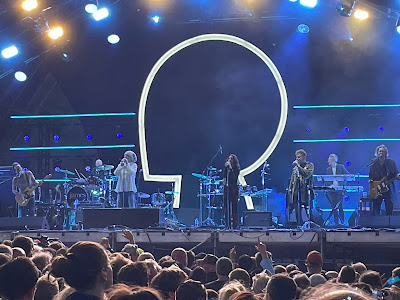 The summers between albums are always an interesting time to see James. With the internet and youtube availability of footage of absolutely everything curbing their old instinct to reveal new material ahead of release as was their wont, these shows become a mix of the last album, hits and a few resurrected surprises from their cavernous back catalogue. Going against their natural instincts and rather than recreating classic albums recreating classic gigs a couple of times this summer has shaped their setlist a little so far this year and does again tonight, but they still manage to pull a setlist out of the bag that has something for everyone and whilst the surprises are a little less of a surprise, they still represent James' desire to not just replicate what they did last time. Last year's All The Colours Of You is still heavily represented with four songs (Isabella, Wherever It Takes Us, Beautiful Beaches as an encore and the title track) and Girl At The End Of The World's Attention provides a stunning curveball in the middle of the set.
The rest of the set, with an eye to the following days Best Of era Barrowland set recreation in Edinburgh, focuses heavily on their 1990s commercial heyday. Yet while for many bands that would mean a verbatim plod through songs, James have to keep these songs fresh to survive so the likes of Say Something, Ring The Bells and Come Home are given new life by the nine-piece. Best of all is Lose Control, and whilst the subtle more understated version that they've worked out might not best suited for open fields, with Chloe starting it on lead vocals and it referencing the original extended version with the "we have found the love to carry on" ending rather than the curtailed single edit, it's a wonderful encapsulation of how this band has to evolve to survive. Live A Love Of Life, last played before this year back in 1994, feels even more relevant and apt than it did on release in 1992 and this iteration of James make it their own. 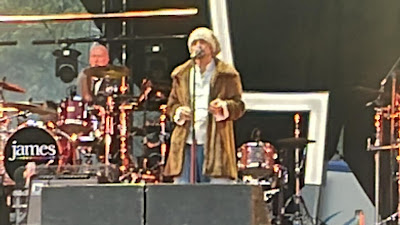 The problems early in the day seem forgotten as the main set draws to a conclusion with a euphoric Sit Down, a song that has drifted in and out of favour with the band over the years, but which feels necessarily cohesive in the fractured times of division in which we're living right now whilst Getting Away With It (All Messed Up) has become an anthem of survival and remaining true to yourself when everything is going to shit around you that connects with people. And it's that connection that James still make whilst remaining true to themselves. Starting the encore with Beautiful Beaches, the centrepiece of All The Colours Of You, rather than a long list of more obvious alternatives is a case in point before a triumphant euphoric Sometimes leaves us singing "when I look deep in your eyes, I swear I can see your soul" as a reminder that real connection and love might not always lie on the surface and you have to go looking for it, but it's worth it when you find it.
James played Johnny Yen, Isabella, Waltzing Along, Say Something, Wherever It Takes Us, Live A Love Of Life, Come Home, Lose Control, Out To Get You, Attention, All The Colours Of You / Many Faces, Ring The Bells, Sit Down, Getting Away With It (All Messed Up), Beautiful Beaches and Sometimes