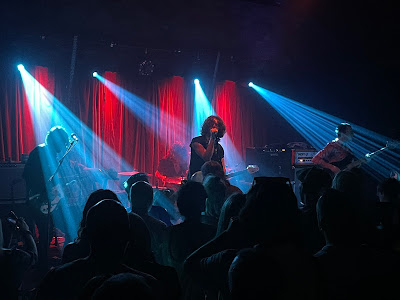 The Blinders headed to the Trades Club on Friday night for a sweltering opening night to their three-date mini-tour to support the release of their double EP Electric Kool Aid. Supported by Glaswegians The Uninvited they delivered a set that featured almost all of the new material plus a series of old favourites from their debut Columbia and its follow-up Fantasies Of A Stay At Home Psychopath.
Uninvited recently won the opportunity against four thousand other bands to perform from Radio 1's Live Lounge and it's not difficult to see why. The Glaswegian four-piece of Gillian (guitars and vocals), Taylor Ray (bass and vocals), Bex (lead guitar) and Fiorenza (drums) properly rock out in a set that's only disappointing feature is its length at just over twenty minutes with a few songs scratched out on the setlist. At their most potent when Gillian and Taylor's vocals combine to deliver a powerful soaring knockout punch and when Bex lets loose on the guitar in that way that makes you look on in wonder at how she makes it look so effortless but sounds so exciting. They finish with Behind The Black Door, the song that won them the Radio 1 competition, but the likes of Take It Back and the superbly-titled I Danced With God At A Jazz Bar are at least its equal. 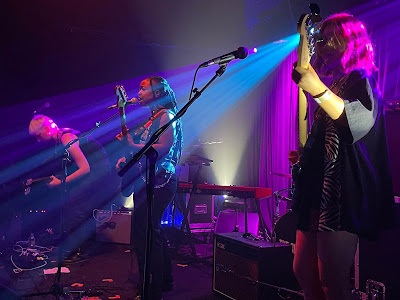 "This is the worst place to be on a day like this, a Blinders gig" Tom says after a couple of songs and at the end of the hottest day of the year so far and the mosh pit about to start and not stop for over an hour he has a point, but it's in these warm sweaty rooms that the essence of what The Blinders do best is most evident. Their campaign for their second album Fantasies Of A Stay At Home Psychopath was derailed first by the departure of their original drummer Matty and then by COVID and a band with a lesser belief in what they do might have called it quits after two such punches, but they've regrouped, expanded into a five-piece and written some of the best material of their career across their recent EPs Electric-Kool Aid Parts 1 and 2. Critically the time in the rehearsal room and studio has allowed them to gel much more tightly than they had when they made their first steps back after the unplanned hiatus. They now look and sound like a band that have been together forever rather than finding their collective feet. Eoghan's guitars allow Tom more space and freedom to live out the front man role, ditching the guitar at points, including a spectacular throw and catch by the tech before he mounted the monitors to preach at us during the breakdown of a Brave New World that felt like it was delivering a fatal hammer blow to the system.
"This is meant to be an EP release party so we better play some songs from them" he tells us half way through the set, which starts with the trio Barefoot Across Your Water, The Ritual Of The Crocodile Man, and City We Call Love as a statement of intent. The Blinders will likely never disown the crowd favourites that have people departing the mosh pit for their own safety, but they very much look and sound like a band that know opportunity may stop knocking at their door and they need to grasp it. It's a set that's powerful enough to fill spaces many times the size of this wonderful venue, to ignite wilder pits and circles than this room can contain and simply blow people away with its power. 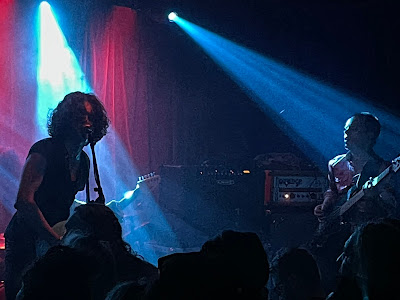 It's a cleverly designed set too. The new songs get their time and place, seven from the EPs if you count the resurrected The Writer, but they leave room for the big hitters at the end. I Want Gold, Fantasies' centre point track, feels more sleazy and vital than ever before. Et Tu rains down like a hammer blow that feels like it's never going to stop whilst Hate Song drags us along under its momentum, stopping in the middle and then rebuilding more powerfully and potently than before. And they leave the best for last as the final duo of Mule Track and Black Glass take the recorded versions and shatter them into a million pieces, all sharp edges protuding and feeling like they've simply taken the raw bones of the songs and reconstructed them burrowed away in their rehearsal studios ready to unleash onto an unsuspecting world as the final battering ram of the night before they depart in a wall of feedback. 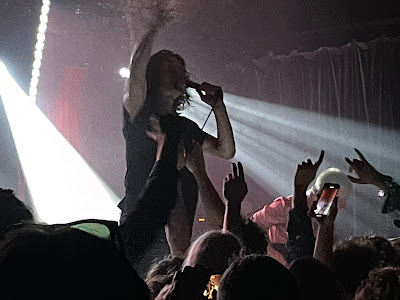 Tom takes the time out mid-set to talk about how the new songs were written, together as a five-piece and with the love of their biggest champion John Hall very much at the forefront of their mind, to huge cheers from a crowd he had to tell to shut up to allow him to speak such was the exuberance and energy that had been generated in the first half of the set. John was always proud of this band, treated them like he would have done his own sons, and it's one of life's biggest injustices that he's not around now to see them develop into the band they always had the potential to if they got their shit and focus together. Raw talent and rock and roll attitude, rightly or wrongly, alone might make for a great band but not for longevity in the current music business. Whereas two albums in can see a band be dismissed as old news, tonight makes us sense that The Blinders story is about to enter a new chapter and new ground and it'll be quite a ride.
The Blinders played Electric Kool Aid, Barefoot Across Your Water, The Ritual Of The Crocodile Man, City We Call Love, L'Etat C'Est Moi, Lunatic With A Loaded Gun, The Writer, From Nothing To Abundance, Images, Hate To See You Tortured, Fight For It, Brave New World, I Want Gold, 40 Days And 40 Nights, ICB Blues, Hate Song, Et Tu, Mule Track and Black Glass.
The Blinders' website can be found here and they are on Facebook and Twitter. They play Liverpool Arts Theatre (June 18) and Blackpool Bootleg Social (19).
Uninvited's website can be found here and they are on Facebook and Twitter. They support The Blinders on the two dates above and headline their own tour at Bristol Crofters Rights (September 26), London Paper Dress Vintage (27), Manchester Yes Basement (28) and Glasgow Garage Attic (29).
___________________________
Follow Even The Stars on Twitter at @eventhestarsuk and like our Facebook page for all the latest updates
Posted by Even The Stars at 17:04

Email ThisBlogThis!Share to TwitterShare to FacebookShare to Pinterest
Labels: The Blinders, Uninvited