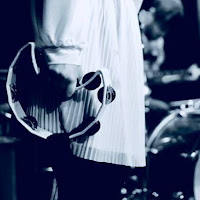 Lights On Moscow first appeared online as far back as 2010, but for various reasons including their work with their respective bands, it's taken eight years for Hazel and Justin to finally put some music out in the world. Lord Let Me Know is achingly haunting in its atmospherics and with Hazel's immediately recognisable evocative voice, they've created something that will appeal to fans of their respective bands without stepping on their toes.

Aorta Songs Part 1 is released via Physical Education Recordings on October 12th on 12" vinyl and CD. The tracklisting is Lord Let Me Know, I Must Come Clean, Like Lovers Often Will and Spirits Around My Bed.