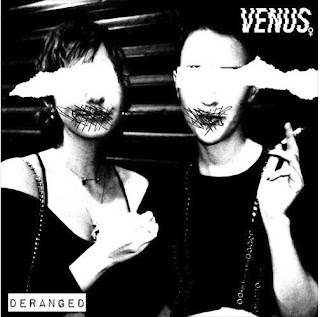 Today Leeds five-piece release their debut single Deranged and play a headline show at their hometown Hyde Park Book Club to celebrate. We caught up with them to find a little more about them, the unambigious message of the song and the burgeoning DIY scene that's exploding in Leeds.

Could you introduce Venus please?

Venus are an all girl rock band from Leeds, who implement astrological and spacey themes combined with classic punk elements to provide an authentic and fresh sonic signature. We aim to create more understanding of women’s rights throughout alternative music, and want to promote a safer and more diverse music scene.

How did you come together as a band and get your name?

Our lead singer, GK had publicly posted a search for female instrumentalists to form an all-girl band, and already had our synth player, Gracie, on board in mid 2017. Our drummer, Gabby messaged GK showing interest in response to the post, Jess (guitar) was tagged in the post and we then reached out to Hannah (bass) as we’d seen her perform with her previous band.

‘The name ‘Venus’ had been flowing around in my head for a while, my old Instagram username was venusgrrrl. It was really catchy and the term never really left my head, it said a lot without really having to say much at all.’ - GK

So then we discussed this as a band and it really just stuck, the symbolism of Venus and the mythology behind it was really relevant to what we were doing, and of course the fact there are five letters in the word, and five members of the band. It just felt right, like something had been carved into stone, there’s not really a way to describe that feeling.

Do you write together as a band or does one of you bring songs to the band to work on?

There are definitely a mixture of techniques used within the compositional process of the band, sometimes it starts with lyrics GK has written and some loose chords she thinks may be suitable, or sometimes it can start with a riff that Hannah/Jess has come up with. Most of the time what we start out with changes as we progress with the song.

The riff of our debut single, ‘Deranged’, started out slightly different. And the small simple change we made paved the way for the rest of the song. It works really well because everyone’s writing techniques really seem to compliment each other, no matter who starts the process off.

Your debut single Deranged aims straight for the jugular with lines like "Look at you, you're such a fucking tool...... your agenda it will fail, karma will prevail, your precious little ego, it got broken by some girls." Is it aimed at someone specific or a more generic attack on how women are treated in society?

It’s interesting you’ve picked up on this, we’re so happy you heard all the lyrics right as they’re such a key part of the song, and to be honest it’s definitely a mixture of the two. ‘Deranged’ was inspired by an ‘if the shoe fits’ type of way, rather than it being about particular person. We had a lot of whispers going around that people thought wouldn’t get back to us, things such as ‘They’re only getting gigs because they’re girls’, or ‘Their image is the only strong thing about them’…things like that really, pretty much anything that would rid us of our musicianship and reduce us down to our gender.

But yes, on top of all of the personal stuff the overtone of the song was speaking more widely, about the way women are viewed in day to day life. It’s about being seen as something that’s a trend, object or novelty, and expresses the anger we feel when being spoken to like this. We were actually told in the past not to be ‘too ‘me too’ movement’, literally…what? So yeah, about people that say things like that. At the same time we wanted the song to be empowering, for people who feel like they’re not being listened to, or people who are often invalidated because of social injustices, this song is for you.

The song comes back then to a line "I swear we mean no harm" which feels like it's making an important statement - that getting equality and respect shouldn't be a fight or a battle with winners and losers, but something that should just happen naturally. Is that its intent?

Yes, most definitely. However there some literate contradictions in the lyrics, such as ‘as girls, we’re not supposed to mean no harm, but I’ll tell you, we do.’

This lyric isn’t a violent threat, obviously, but more a metaphorical one. It means that it’s okay to be angry with how you’re being treated. Unfortunately when women show any kind of anger with how they’re being treated, they’re branded as an ‘angry feminist’ or a ‘psycho’. This song plays on that, hence the name of the song ‘Deranged’.

There seems to be a resurgence of louder bands in Leeds right now. We covered Lunar Sounds' debut EP late last year and venues like The Lending Room and Hyde Park Book Club as well as the Brudenell of course seem to have a great schedule laid out. Does it feel like there's a new scene developing over there and are there any other bands you can recommend to us (and our readers).

We love Lunar Sounds! Tonight is the first time we play with them, but we hope it’s the first gig of many. There definitely seems to be a new wave of bands coming out of Leeds’ art scene yes, and honestly it’s so exciting. Especially with collectives such as Girl Gang Leeds and Music Leeds consistently providing more opportunities for ALL women, sisters not just cisters, which is incredibly important.

It’s so incredible to be a part of such a community based and DIY scene, and we think Leeds will see far more success over the next few years because of this community. We’re particularly loving Purple Thread, who we’ve played with a couple of times. They’ve got such a feel-good vibe about them, and they really know how to put on a live show. They’re also releasing a single soon, too! On the 31st of January, we believe. Get on it!

You're launching the single with a gig at Hyde Park Book Club in Leeds tonight.  Are there any special plans for the night?

Yeah it’s a great little venue, but will be our first time playing there! Other than lots of chatting, laughing and being musical, we will hopefully have some physical copies of ‘Deranged’ to sell, alongside our ethical handmade merchandise. As well we’ll be playing a re-thought live set, as well as a new song. Hopefully people think that’s exciting, we’re certainly excited!

Deranged is your debut single.  Do you have other tracks ready to release and are there any of them that we should particularly look out for?

We’ve been in the studio for the last couple of weeks finishing off the mixing process for Deranged with our label Monomyth Records, and our producer Jack Murray, just adding some little embellishments and tweaks here and there. But we did get time to record a couple of other songs which will be set for release later this year, so hopefully we’ll get the ball rolling with that soon!

What are your plans after the single launch - do you plan to try and play further afield?

We’ve been lucky enough to have played around England quite a bit already, we’re travelling up to Newcastle to support Estrons on the 29th. We’re all from different parts of the UK and met in Leeds through Uni, so we’ve been able to book shows outside of Leeds with ease. But we do want to try and get more shows in some major cities we haven’t played yet though, such as Sheffield / Manchester / Cardiff / Glasgow, that’d be ace.

Final question, if you were describing Venus to someone who had never heard of you before, where would you start?

That we’re taking over from Trump. No, just that we’re five feminists trying to make a living in a male dominated industry, and more than anything love writing music together. That’s all there is to it really, support us or don’t, we’ll carry on anyway.