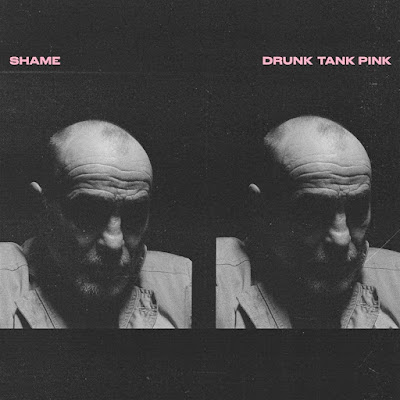 Recorded in France in 2020 Drunk Tank Pink was ready to be unleashed to an expectant public when everything came to a crashing halt due to a global pandemic that has caused nothing but heartache for a plethora of musicians. This was Shame’s second album and it was meant to showcase their new found maturity and sound. Nurtured in the womb and ready for arrival into an expectant world the delay has been worth the wait.

The album is full of feelings that capture the times we live in perfectly. Deep emotions for fragmented times. There’s that feeling of isolation and despair for band and listener as when the music or work stops you’re left with the silence, the anger, the lack of energy to motivate yourself but you have to, to survive.

Alphabet kicks off proceedings and it’s as close to the old Shame as we get on this highly ambitious follow up to the magnificent Songs of Praise. As the motorik drums do battle with angular guitars, spiky frontman Charlie Steen bellows like a town crier “Now what you see is what you get” setting the tone from the off. Shame are angsty and wear their hearts on their sleeves to positive effect.

Post-punk number Nigel Hitter tackles the mundanity of every day life. The repetition and monotony that eats away at you (“it just goes on”) when you crave to be anywhere but where you are right now. Every menial task seems like an impossible ordeal with no fruitful end in sight. Steen asks us “Will this day ever end? I need a new beginning”.

Born in Luton is about being locked outside your house and nobody’s at home. Or is it as straightforward as that? You wouldn’t think so given the complexity of the song. It’s characterised by convoluted and odd rhythmic structures courtesy of messrs Sean Coyle-Smith and Eddie Green on guitars. The irregular stopping and starting leading to a mid song breakdown as Steen informs us “if the body is willing, then so is the mind, if you can’t trust in either, prepare to decline”.

March Day offers no comfort from the feelings of isolation despite the jingle jangle of guitars opening the song as an inward looking Steen tells us “in my room, in my womb, is the only place I find peace” although he’s shouting this over coiled guitars and the persistent, thunderous drums of Charlie Forbes whose drumming throughout the whole album has elevated to the next level.

There’s a riff that accompanies Water In The Well that will no doubt become instantly recognisable in the future. Steen roars and bawls his way through the arrangement with his usual gusto doing battle with the silence and spacing in the riffs to great effect. His deadpan delivery “this is the last time Acid Dad” is less than convincing and hard to believe though.

From love that is lost comes the outstanding Snow Day. The musical arrangement, melodramatic in parts, takes many twists and turns just like love itself. From the sense of metal splintering through the intersecting guitars to a demanding drum roll Steen alerts us to his awareness that “all mountains crumble and turn to dust” The structure of the song, the words and the emotions all changing like the weather and the landscape that surrounds it. Like many songs on the album the fragility and despair is inevitably never far away. Reminding us all that we are all human.

Human for a Minute slows things down a notch or two. The rumbling bass line of Josh Finerty reminding us he’s a vital cog in the Shame machinery as the song purrs along harmoniously. Easy on the ear, not like many Shame songs in terms of decibels, Steen laments “I’m half the man I should be” showing his vulnerability and susceptibleness to feelings. The dream like poignancy of it all makes you step back and assess your own personal situation not to mention that of the usually boisterous frontman.

The dual combination of Great Dog and 6/1 fit perfectly together. Great Dog is a classic two minute driving drum and bass punk song chaperoned by prickly guitars creating an expansive wall of sound that threatens to cave in on you. Coming up for air Steen is immediately on the offensive at the start of 6/1 hollering in a state of unrest “I represent everything that I hate, yet I’m the person I always dreamt I would become”. In disagreement with himself and unsure of himself he proclaims “I hate myself, but I love myself”.

Penultimate song Harsh Degrees starts with great intensity. Full of zest and feeling it annihilates your ear drums to the point they could quite easily bleed. You don’t have time to think as you’re blasted from all directions by the nuances and complexities until they unravel enabling the listener to experience a deeper connection to the song although Steen reminds us “the less you think, the less you care”.

It’s noticeable that the band have matured and developed into an even more confident sounding band who clearly haven’t rested on their laurels. They’re not afraid to experiment and Steen isn’t just full of sneer and posture as his lyrics are more intelligent and come with more depth to them as illustrated in album closer Station Wagon.

The slow burning build up, increase in tempo, mid song breakdown with keys and dissonant climax leave the listener signing out on a positive high. “I need a new resolution, and it’s not even the end of the year” mourns Sheen ruefully yet midpoint he has an epiphany looking up to the clouds remarking on “a distant memory” and how “anything could ever look so beautiful”.

One last time the band pull together creating a cacophony of noise, a sense of unity with all the band testing each other, teetering on the brink then pulling it back until they emulsify into a drunk tank pink. An unexpected force shaping how the band think, feel and behave.

The band are itching to get back out on the road to showcase these eleven songs but for now we are left to take it all in and like so many bands when they eventually do tour the audience will be singing along, knowing every word, in unison and appreciation.

Drunk Tank Pink has exceeded all expectations in terms of quality and relatability in these bleak times. The band have created something beautiful out of a very dark place. The album is most definitely a grower. One of those albums where the slow burn means you get something new out of the album with every listen. It remains cutting edge and exciting and this can only bode well for a band spearheading a movement that remains very much alive.

Email ThisBlogThis!Share to TwitterShare to FacebookShare to Pinterest
Labels: Shame