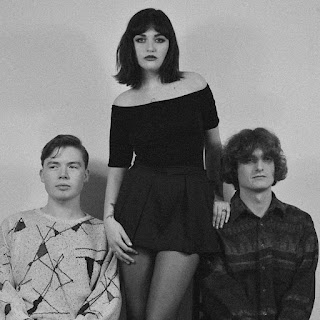 Dead Man's Eyes is the lead track from a new compilation album released by Mary Joanna of unreleased tracks from the short-lived existence of their band in 2015-6 as a tribute to her brother and bassist / programmer Will Coogan who passed away in 2021.

Back at the end of 2015, Mary Joanna seemed to be on the brink of a breakthrough. The three-piece fronted by Mary Joanna Coogan with Steven Evans on guitar and Will Coogan on bass and programming had played a number of well-received support slots around Manchester, including one with Coves at The Castle Hotel where we described them as "The eight songs of their own that they play in addition to a cover of Sparks' Never Turn Your Back On Mother Earth display exceptional promise given the band have only been together a few short months - they don't mess around with unnecessary clutter in them, they're direct and show an understanding of the appeal of three minute pop songs." However they split in 2016 and the songs that had brimmed with so much promise at those shows went unreleased.

Will's untimely death at the age of 29 encouraged Mary Joanna to revisit the songs and release them as a posthumous tribute to Will with a lead single Dead Man's Eyes to be featured on a 7" single and a nine-track album as a digital download featuring many of those songs that charmed us back in 2015 plus Will's recording of Pink Floyd's Fearless, a cover version that was played at his funeral.  A percentage of the proceeds of the album will be donated to Sudden, a charity that helps people deal with sudden bereavements and who helped Mary Joanna in the weeks following Will's death.

The album and 7" single can be purchased from Mary Joanna's Bandcamp.