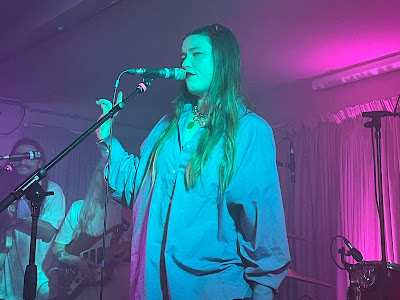 Wet Leg headed to Manchester as part of the celebrations of Independent Venue Week to play a sold-out-in-seconds show in the Pink Room of Yes to a crowd of the already converted and the curious. Performing their forthcoming debut album in full and more they delighted a two hundred and fifty crowd with a song full of fun and joy that's been in short supply recently. Support came from the contrasting but both excellent High School and Mandy, Indiana.
High School open up proceedings and the room's already pretty full for the hotly-tipped Melbourne band who've recently relocated to London and have received rave reviews for their debut EP Forever At Last which appeared at the tail end of last year. Expanded to a four-piece for the live shows, their dark intense claustrophobic songs on record are transformed into real life by being able to see the whites of their eyes, although Rory's are often closed, hand in pocket, as these songs reflect emotional turmoil and uncertainty - lyrics about "let me live my life" (New York, Paris and London), or "wondering if you still love me, night after night in my room" (De Facto). 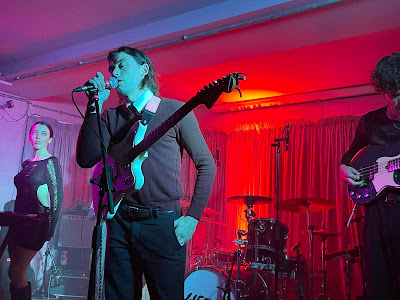 Lilli's synths and the programmed drums add light, shade and a propulsive power to these songs, and with the vocals higher in the mix than on their recorded counterparts, particularly on a glorious Sirens that blossoms and shows its true colours. Effortlessly cool in their approach, they fuse their evident love of a wide spectrum of music from electronic to goth into something that's very much their own, they'll be gracing stages like this at the top of the bill by the time summer's out.
Mandy, Indiana are something of a phenomenon. It's rare you see something as out there on a bill like this, but they absolutely take the crowd with them. A mix of the experimental musically with the most expressive front woman part-singing, part-speaking, part-shouting words in French that could mean absolutely anything to the mono-lingual majority in the crowd is something you'd expect in one of the city's dark basements, but Mandy, Indiana are defying the odds in bringing their cacophony to a wider audience and you sense the growing love for them as their chaotic set progresses. 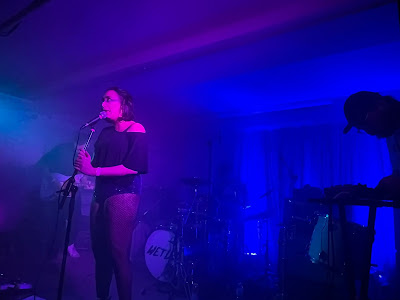 At the helm is Valentine, one minute repeating the "Bonne Nuit" of  Nike Of Samothrace like the guardian at the doors of Hell, the words themselves welcoming, the delivery laced with poisonous intent. She stops singing, throws her head back and starts laughing and you don't know whether to laugh with her or wait for a hammer blow to the head or for her to throw herself to the floor, legs in the air cackling at the craziness of all this. The next minute she jumps off stage and comes and stands amongst us when the instrumental interludes in their set kick in. Mandy, Indiana draw you in and once you're in their grip they refuse to let you go - they put you on edge, uncertain of what their next turn is going to be, a thrilling buzz and originality that we don't get enough of.
There's a real sense of anticipation as Wet Leg take to the stage. With more NME award nominations than they have songs in the public domain, and a debut single Chaise Longue whose off-kilter brilliance puts them the envious but also potentially dangerous position of having a song that has thrust them into the spotlight so early in their life as a band. With Gorilla sold out in a flash and much bigger halls doing the same post a summer festival season where they are going to be the must see new band, it's endearing to see them still taken aback by the reception from 250 people and hilarious when Rhian puts her hand over her eyebrows to shield the light so she can see the back of the crowd when she's going to need binoculars to do that in the not distant future.
It's a brave move by them to play a sixteen-song set months before their debut album is even out and with only four of them out in the world. It would be easy for them to bash out nine songs and leave some surprise for their self-titled debut and not run the risk of losing the audience's attention. They don't and they don't lose the attention either, the room has fallen for them and there's a good mix of age and gender in the room too that suggests they've got a universal appeal that will stand them in good stead as they continue to grow. Musically they're strong, the five of them are a very tight-knit unit, the relationships seem strong as they cast looks of disbelief that turn to big grins at the end of the songs that they rattle through at considerable pace. There's no six-minute epics around with Wet Leg, just short sharp punches to the funny bone that leave you smiling as much as they do. 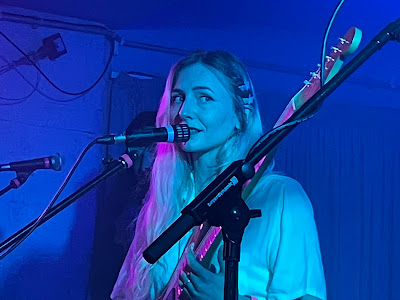 They throw in a cover of Boyzone's Life Is A Roller Coaster, before which Rhian laughs is a cover, but they very much put a Wet Leg twist on it. Throughout the set they make clever use of five sets of vocals, Hester taking the lead on Convincing, but then along with Ellis, Henry and Josh adding the backing vocals and harmonies that give the songs lift and depth. A mosh pit develops as they get towards the end of the set and a glorious Angelica and its refrain of "Good times, all the time" which could become a promotional slogan for their live sets. By the time they finish, predictably but absolutely understandably, with Chaise Longue, the heaving hot and sweaty mass of the Pink Room has them grinning from ear to ear.
It'd be easy as some have to dismiss Wet Leg on the basis of the innuendo of their first two songs as something of a gimmick, but by the time the summer's over enough people will have witnessed them first hand, coming to the party with their mind made up and having it changed, to dispel that lazy preconception. Live, they've got power and volume that lifts you up, an intuitive relationship between them that great bands always possess and more songs than a cursory observation of them might lead you to think they would. They need to start getting used to full rooms losing their shit to them because it's going to be happening night after night and getting bigger each time.