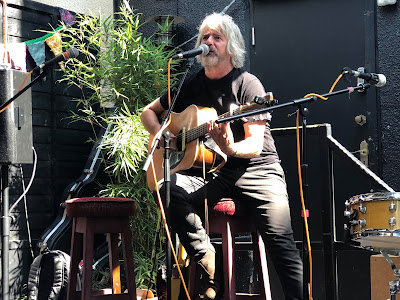 A gig! A real life gig! John Bramwell played two socially distanced shows in the garden of The Rose And Monkey in Manchester on Sunday afternoon, mixing old I Am Kloot tracks with new ones from his forthcoming album with his Full Harmonic Convergence project. As the afternoon progressed we inadvertently became the focus of the show.

It's five months since our last gig, the longest since we first went to a gig back in 1986. The excitement of seeing familiar friendly faces is obviously tempered by trepidation, the uncertainty about how you should greet people you'd ordinarily throw your arms around and hug, the people you don't know and where they've been and how they'll respect social distancing - and whether that will impact the enjoyment of the show. We chose a safe space, the garden of The Rose And Monkey with people we trusted to put on a show and adhere to the guidelines - and our trust was well-placed. People had been assigned groups to sit with based on ticket orders and email communications beforehand, tables were laid out with plenty of space and a bar ordering system by text and whilst it felt relaxed, it also felt extremely safe.

And it was beautiful to hear music being performed live again - a sense that normality might some day start to return. The sun shone and John delivered two shows, each split into two sets, with a smattering of new songs accompanied by Dave and Andy Fidler on bass and cajon / snare drum interspersed amongst some of the finest songs the city of Manchester has ever produced.

The new songs, from the Full Harmonic Convergence album that John is likely to self-release later this year, stand up against the old I Am Kloot classics. World Full Of Flowers is a particular standout, wistful, longing and with a sense of hopeless romanticism that has characterised much of John's finest work - of which there are many standout examples across the two sets (The Same Deep Water As Me, From Your Favourite Sky, Ferris Wheels, At The Sea as well as Meet Me At The Station from 2018's criminally overlooked solo debut Leave Alone The Empty Spaces).

The others though also more than support John's statement that he's not be as happy about an album since Kloot's debut Natural History - which when you consider the strength of his back catalogue. The beauty of one of the newest songs, Sky Full Of Thunder And Lightning, which opens the day, shines through even though it has to be restarted whilst Working My Mind Off in the second set has an edgy urgency to it. 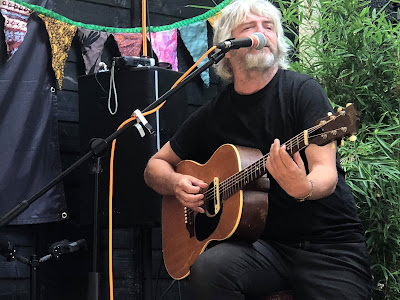 There are of course plenty of moments of humour. John asks if his soporific sounds mixed by sunshine and alcohol have sent us to sleep He jokes about Dave knowing the songs better than him and watching the Moto GP qualification instead of learning the new ones yesterday and when he plays Proof at the end of the first set of the second show tells us at the end he realised once he'd started playing that Dave played guitar on it not bass. At one point he takes an audience suggestion to do a Mexican wave and gets us all to participate.

We fall victim to his wicked sense of fun too when we make the mistake of going to the loo during the second set, getting all forty people to chant my name out repeatedly and then encouraging everyone to leave the garden and hide round the corner so I'd come back to an empty one. It's the sort of light-hearted wickedly funny moment that makes every John Bramwell gig a unique experience - the off-the-cuff nature of them and his between song chat about whatever comes into his head making it an experience rather than a performance.

He takes requests from the audience - Black And Blue, one of the earliest songs he wrote at sixteen and one he's still intensely proud of, is as magnificent as the moment of its creation. To The Brink and Northern Skies might have muted crowd participation vocally, as if the audience is unsure about whether to join in or not, but that's more down to the strange times we find ourselves in than anything else.

This was very much a day of feeling our way in the new world - for John, The Rose And Monkey and the audience, many of whom were seeing gig buddies in their natural habitat for the first time in five months, but it rekindled the magic of watching live music, from experiencing a shared moment that is captured in time in memories and which allows you to switch off from the rest of the world. And it felt like the right place and the right time and in John Bramwell, we had the perfect songbook and performer with which to take those first tentative steps.