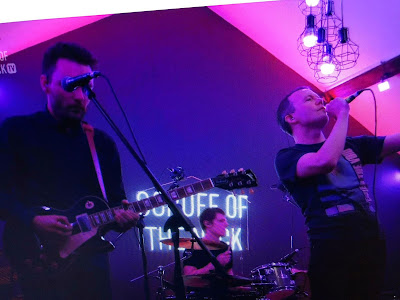 "Manchester Royalty" was how presenter Abi McCarthy described The Slow Readers Club ahead of the interview that preceded this livestream. Across a twelve-song greatest hits set, that really lived up to that billing, The Readers demonstrated exactly why they're being talked about in such terms after having been underdogs on the scene for so long.

There's something fitting about The Slow Readers Club playing this livestream from Manchester label, promoter and management company Scruff Of The Neck's Northern Quarter offices. The two go back a long way to when they'd come together to put on gigs in pubs in Manchester suburbs to moving through a series of Manchester venues from the Night And Day to Academy 3 to Gorilla to The Ritz to The Albert Hall and culminating in their biggest Manchester headline show, a sell-out night at The Apollo in conjunction with national promoters DHP at the end of 2018 that seems like a lifetime away. Both have grown to make their mark outside the city's boundaries.

It's been a strange twelve months for The Slow Readers Club. Having gone full time in 2019 and recording their Joy Of The Return album, 2020 was set to be their year and the pandemic struck the UK just as they were about to release it and go out on tour. The album went top ten nonetheless, an incredible achievement for a band whose every opportunity came from word of mouth, an irresistible ability to craft anthemic songs that connect with an audience, whether it be a dozen in a dark Manchester basement or three and a half thousand in the cavernous Apollo. To hear them is very much to love them, and the 18.3k viewers will undoubtedly have won them a whole new set of admirers on top of the almost religious fervour they've captured in their fanbase over the past few years. 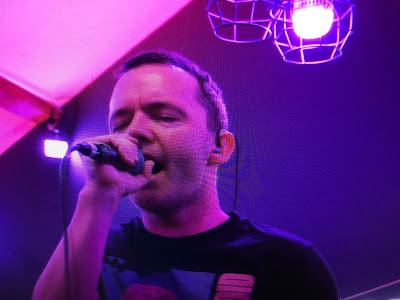 The forty-five minute set means they have to leave out some of their big hitters, but they still touch base on each of their five albums with two tracks from The Joy Of The Return (All I Hear and The Wait) and three from its follow-up 91 Days In Isolation, written and recorded over the course of last summer as they adjusted to the changed circumstances without batting an eyelid creatively and capturing the spontaneity of the new way of working without losing any of the energy of their previous work. In Everything I Own, Two Minutes Hate and Yet Again, they inject an urgency that gives them another string to their already impressive bow.

The older tracks - Block Out The Sun from their self-titled debut, Plant The Seed, I Saw A Ghost and Forever In Your Debt from their breakthrough self-released follow-up Cavalcade through to their first top 20 album Build A Tower's Lunatic, You Opened Up My Heart and On The TV - have to be on the very peak of their game to keep their place on the team and they do just that. Delivered with the confidence of a band that you wouldn't know haven't played a live show for over a year save for a couple of lyric ad-libs from Aaron, it's an impressive set that bodes well for their main stage billing at festivals this summer. The songs lock into a groove, unmistakably Readers but each with a personality of their own that makes them far more uplifting and challenging than bands that stick to a tried and tested formula without experimenting for the sake of experimentation.

For an audience that's desperate to get back listening to live music, they are the perfect reminder of how live music can lift the mood.

The Slow Readers Club played All I Hear, Lunatic, The Wait, Plant The Seed, You Opened Up My Heart, Everything I Own, I Saw A Ghost, Block Out The Sun, Two Minutes Hate, Forever In Your Debt, Yet Again and On The TV.