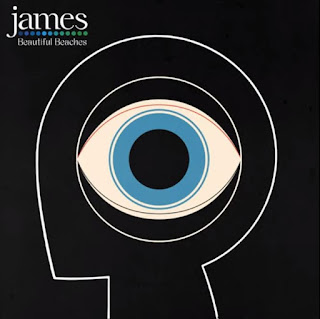 Beautiful Beaches is the lead single and second track to be revealed from James' forthcoming album All The Colours Of You, due for release on June 4th.  Lyrically it references front man Tim Booth's decision to move away from his home in Topanga Canyon outside Los Angeles to avoid the growing risk of losing everything to wild fires that have increasingly swept California in recent years.

The track's uplifting chorus which declares "we're racing down to those beautiful beaches" might hide from some the meaning behind the lyrics, something that any fan of James will recognise as they approach their fifth decade as a band, turning darkness into light, aided here by a pulsating production from Jacknife Lee. It's certainly something the band acknowledge as Tim explains - "We love how this song is so uplifting, focusing on new beginnings. I like the idea that many might not know the backstory and hear it as a post Covid holiday song! Praying that the lyrics don’t turn out prophetic."