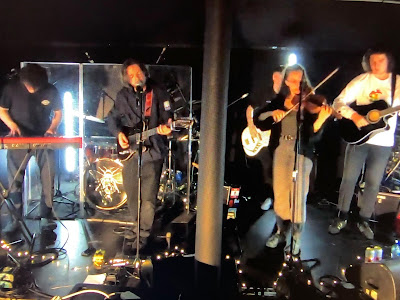 Rosellas celebrated the midnight release of their latest single Common Ground with a live stream set from Manchester's Spirit Studios. Showing a love of their many influences yet merging them into their own unique sound that sounds both modern yet timeless, the eleven-song set demonstrates they're a band to be reckoned with.

Already prolific with two collections of demos and four EPs, Rosellas are showing no signs of taking their foot off the gas with the release of a new three-track EP Common Ground, the title track of which brings this live stream to its conclusion. Rosellas are not bound by the rules that bands seem to play now of drip-feeding songs out rather than showing a body of work and, as this live stream demonstrates, it's an approach that is paying dividends as they feel like a band that knows what they're about and are unafraid to show off more than just the shiny side of their art.

That very much comes across in the performance which is more an insight into them rehearsing songs than it is a live gig experience - something that even the most energetic of live bands have struggled to replicate over the last twelve months. What is does is simply focus the watcher on the quality of Rosellas' musicianship, where each member of the band is integral to their sound, and the songs which never drops whether it be their lead single tracks like Damaged or When This Has All Blown Over or the EP tracks like The Edge or Sometimes Always. The newer songs like Bare Your Soul and Time Machine, from their Demos 2 compilation given away free with merchandise purchases, show both a continuation and a development of their sound.

They're astute enough to know the power of backing vocals to give songs a lift and a personality of their own, they bring in violin for a couple of tracks to add something different to their mix of two guitars, bass, drums and keyboards. Add that to the intuitive natural musical interactions between them, that makes it feel like they could really do this in their sleep and still charm, excite and seduce the listener rather than overpower them with adrenaline and volume. And in many ways that makes them stand out more rather than shrink into the background. As they finish with Common Ground, it feels more like a start.

Email ThisBlogThis!Share to TwitterShare to FacebookShare to Pinterest
Labels: Rosellas