The Lucid Dream - The Deep End 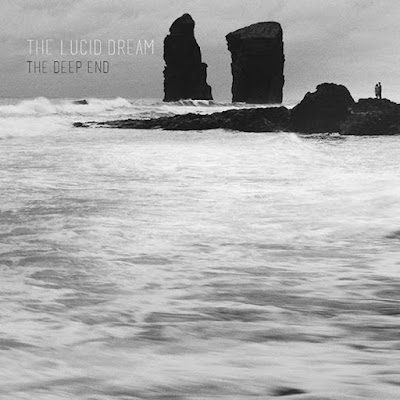 Rewind to last year and a packed Golden Lion in Todmorden. An ecstatic audience witnessed Carlisle's The Lucid Dream deliver a one off performance and a stunning set, during which they showcased some of their new album. The album was put on hold due to the pandemic. However the album has certainly been worth the wait.

The Deep End was recorded at Whitewood Studios in Liverpool with Mark Emmerson, Rob Whiteley and long time collaborator Ross Halden and is out now on the band's Holy Are You record label.

Opening with the epic (even by their own standards) Coalescence, The Lucid Dream deliver an eleven minute slice of psychedelic dance like only they know how to. We've witnessed many of the band's performances in the last few years and their refusal to play by the rules whilst pushing boundaries and stretching both themselves and their listeners is what draws us to them. On this opening number, they continue to do just that. The pulsating beats and Mike Denton's storming bass get Coalescence underway and drive it along whilst songwriter and vocalist Mark Emmerson uses his ever increasing collection of synths, Roland drum machines as well as his new sampler. Shorn of any guitars, Coalescence is both a bold statement from the band and an infectious, euphoric floor filler. Lesser bands might close the show with such a tune, or ease the listener in slowly before delivering this but then again, The Lucid Dream are not like other bands.

Lead single Chi-03 follows, upping the tempo. This time Emmerson has drawn on the influences of old skool hip hop to deliver another dance floor tune whilst still retaining the characteristics and genetics of The Lucid Dream. For me, Chi-03 has the same power and euphoria found on the legendary 80s industrial dance classic Headhunter by German pioneers Front 242.

Leave Me In The Dark is an out and out drum n bass tune, visiting an area that The Lucid Dream haven't taken their listeners to before. Once again, it shows the band are not afraid to take risks and they continue to push their boundaries. As the tune progresses, they showcase their dub influence again; they pack more into this one tune than some bands can muster on a whole album. And therein for me lies their appeal - there's so much going on in their records, you can't just stick on one of their records and have a casual listen in the background, it commands your fullest attention and you are duly rewarded for it.

Fight To Survive gets the second half of the album underway and again doesn't disappoint. Influences here are far and wide; I can hear Isn't Anything era My Bloody Valentine and an 80s club influence simultaneously. Emmerson's repetitive vocals, big drum loops and more commanding basslines make this another impressive tune.

Sunrise shifts the tempo and mood once more and this time we are back on more familiar Lucid Dream territory, with the band favouring acid house and Balearic beats. It's like a follow up to the legendary, epic dance floor classic SX 1000 from the Actualisation LP.

The band throw in a curveball to close the album. High and Wild sees the band lead with acoustic guitars. If Coalescence, Chi-03 and Sunrise were the tunes to get the party started, then High and Wild is the soundtrack to the comedown. It's the only guitar heavy track on the album and once again ably shows just how versatile the band – Emmerson (vocals, guitars, programming), Wayne Jefferson (guitars, synths), Denton (bass) and Luke Anderson (drums) – really are.

Few bands produce material this rich by the time of their fifth album. It is evident that The Lucid Dream still have plenty to offer as this album demonstrates. The Lucid Dream play Hebden Bridge Trades Club (October 15th), Carlisle The Brickyard (October 16th), Glasgow Stereo (October 29th) and Manchester Yes (October 30th).