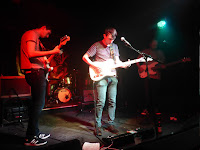 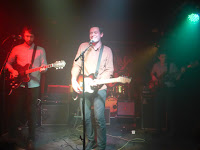 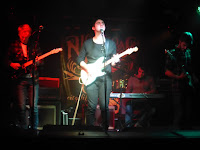 The latest Antics club night at the Night And Day featured three well-matched quality bands including the first Manchester and second ever show for ex-Courteeners bassist Mark Cuppello's new band Lungs. Our first gig of 2016 set the bar high for the rest of the year.

Opening up the evening are Tremors, a Manchester band that's been building themselves a following through 2015 and who tonight impress us with a well-structured set of songs that come from the heart. The five-piece aren't afraid to expand their horizons and to make themselves sound big.  Whilst they describe themselves as shoe gaze / alternative / americana, we can hear some more radio-friendly anthemic tendencies fighting their way out. Debut single Time Again is a good indicator of where they are, but the set offers enough variety to suggest that they're only just getting started. 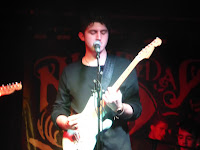 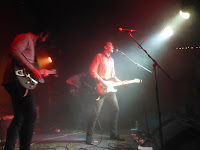 Which is exactly what Lungs are. Other than a secret warm up gig in Winsford a couple of nights earlier, this is Lungs' first ever show and there's a great deal of interest been generated by the band's bass player Mark Cuppello given the mystery around his departure from The Courteeners after a decade in the band. Whilst this might have piqued the interest of the crowd, Lungs' music immediately becomes the focus. This is a band that have clearly honed their sound before making their live debut and already they have a set of eight songs that are both adventurous in intent and their delivery fused with a fluidity and rhythm to them that impresses us. Stand out tracks were Animal and Still Awake, but their final song All In is the real showstopper. 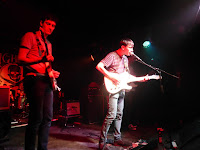 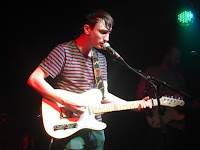 By The Sea are of course relative veterans compared to the other two bands, their two albums, the self-titled debut and 2014's Endless Days Crystal Sky confirming their place as part of the thriving Merseyside scene. They start with I See A Crystal Sky and it's impossible not to fall for their charms. They're masters of creating songs of understated beauty, there's no big show-off riffs or stage posturing, other than a weirdly out of place Queen cover, because their delicately crafted songs do that for them, whether it's Eveline from their debut or You're The Only One from the follow-up.  The new songs that they reveal tonight are made of the same gorgeous melodies that characterised those two albums which suggests their third album will be something special and they'll be well placed to capitalise on the love for the scene that birthed them that will come with the return of The Coral. It's the least that they deserve.

Email ThisBlogThis!Share to TwitterShare to FacebookShare to Pinterest
Labels: By The Sea, Lungs, Tremors