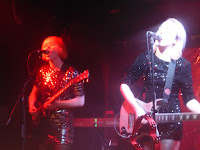 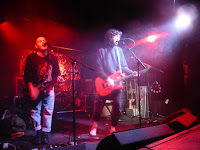 New Years Eve has become one of those sanitised events of the year that either prices you out of it or becomes so commercialised and an excuse for people to rip you off that it's lost its appeal to so many. Fortunately, the Night And Day has come up with the idea of giving us the opportunity to do what we do all year on this night - watch live music in a great small venue at a reasonable price. Last year we saw Blossoms, this year we saw in 2016 with one of Manchester's best bands PINS ably supported by newcomers Flesh.

Flesh are relatively new to us. They describe themselves as "snotpop" and their lead singer has a red furry guitar. Their recent track W8 4 Me does however show a lot of promise despite the horrible title so we're intrigued to see what they have to offer. There's shades of Liam Gallagher at his most sneering and potent in there, but, whilst so many bands use this as their one line of attack, Flesh have a lot more at their disposal. There's variety in the structure of their songs and they don't take themselves too seriously, which is good on a night like tonight where people want to party. Their gig schedule for 2016 looks fairly full already in the first quarter of the year, so we should hopefully hear and see a lot more of them.

PINS are in a perversely Mancunian way the perfect band for New Years Eve. Behind the dark tales of confused love, lust and loss, they're a band that look like they're having the time of their lives on stage and this transmits itself to the packed and exuberant audience. It's incredible how they've progressed from those scrappy early gigs three years ago where they were still learning their instruments into this fully-formed five-headed machine that will rip your head one moment with the ferocity of the likes of Oh Lord but will then tender the wound with the subtlety and beauty of four voices lifting their leader Faith's up into the heavens on a cloud of harmonies. 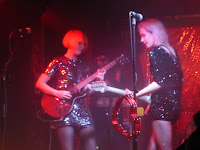 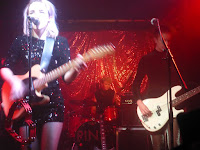 The set focuses heavily on last year's Wild Nights album with Get With Me and Girls Like Us and early single Luvu4lyf also present. The latter is one of those songs that will get recognised as a classic after its time such is its sheer headrush of energy and passion rolled up into two and a half minutes, whilst the more recent tracks such as Too Little Too Late, Molly and Young Girls emphasise how far they've come as songwriters.

There's still the chaotic elements of those earlier gigs, Lois nearly taking her head off on a hanging speaker as she plays the rock star at the start of one track by mounting the front of the stage, there's technical issues and sadly Sophie is too far back for most of the crowd to witness her standing up drumming in parts of the set. They finish a song before midnight with two minutes to spare so there's a comedy moment whilst they work out what to do. They see in midnight with loved ones on stage before covering us in streamers and allowing friends PALBMA to take centre stage for a song.

PINS' journey has been an amazing one and one that hopefully will continue in 2016. They're one of the most exciting live bands in town with a thrilling hard edge, but also with a sense of playfulness and fun that transforms their gigs. They don't play by anyone's rules other than their own though.