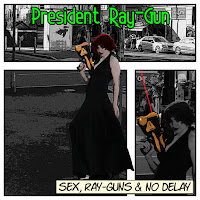 Sex, Ray-Guns And No Delay is an interesting concept of an EP. The six tracks are made up of three reinterpretations of tracks from their debut EP that was released in the summer of 2014 and three new tracks. It's a record that wears its influences on its sleeve, but is clever and crafted with such care that it's a unique and endearing set of songs that will charm and disarm you without before you realise.

The Manchester four-piece have a proclaimed love of sci-fi, comic books, alternative rock and 90s pop, and, if it hadn't said it in the press release, one listen to the EP would lead the listener to that very conclusion. You'd imagine them as the geeky kids sat in the corner of the classroom that keep themselves to themselves with no pretension of being cool and indifferent to whether they're in fashion or not. But, what they've fashioned here is something that goes beyond any definition of cool - Sex, Ray-Guns And No Delay is a timeless set of songs that you couldn't carbon-date to any degree of accuracy between the mid-1980s and today. There's parts where the guitars, in particular the bass on Giant Haystacks (even the titles have the references), sound like the mellower moments of Pixies earlier work whilst the opening track Lucky H has that familiar feel to it that you can't quite put your finger on. You like it, you think you've heard it before somewhere else, but you haven't, it's just their ability to create something that instantly grabs you.

The lead vocals are deliberately deadpan throughout, and rightly so as it fits perfectly with the mood of the songs, take the opening of Out And Down where the monotone delivery echoes the sentiment of the words "I don't mean to be downbeat, why don't you pull up a seat, talk it all over with me", but when the backing vocals and harmonies kick in, they have that uplifting feel that they should do. It's a formula, albeit with different variables, that they use to great effect throughout.

The final track No Delay is the one where they really try to spread their wings, a song that jumps around all over the place at the drop of a hat and which points to a weirdness that's not evident in the five songs that's preceded it. It does sound a little like some early Bis tracks without the steroids pumping through them.

Sex, Ray-Guns And No Delay is a record that, like its creators, is fully comfortable in its own skin and ultimately that's what makes it such a success. It's six great songs that make no huge claims about themselves, but which don't need such bravado to make their point.