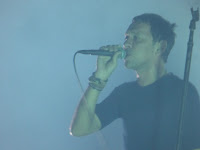 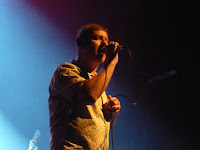 Twenty-one and a half years on from watching this same line-up (in reverse) in this very same building, Shed Seven and Inspiral Carpets returned to Manchester Academy for the first of two sold out nights to help the room packed of forty-somethings to return back in time to their twenties.

It's baffling to us why Inspiral Carpets can't headline a venue like this on their own. They have a greatest hits album that when you line it up against Shed Seven's stands up toe to toe (compare the tracklistings) and it'd be wide of the mark to dismiss it as because Stephen Holt is back in the band because they hadn't played these size venues in the tours that preceded his return. But the room is full by the time they take the stage to the always bizarre noise of the audience mooing at them. 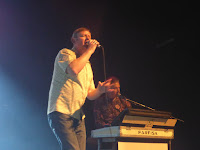 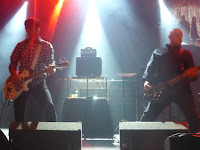 Their ten-song features most of their best known hits - Joe, This Is How It Feels, Two Worlds Collide, I Want You, Find Out Why, Dragging Me Down and the concluding Saturn 5 which sees a sea of 3,000 arms raised aloft - as well as old favourite Directing Traffic and two of the singles off their recent self-titled comeback album You're So Good For Me and the John Cooper Clark sampling Let You Down. As you'd expect from a band at the top of their game, they fill the room with the swirling organ sound of Clint Boon, the trio of Graham Lambert on guitar, Martyn Walsh on bass and Craig Gill on drums providing the inimitable structure for Clint to weave his patterns and for Stephen Holt to dispel once and for all those doubt his ability to front this band in venues this size. Inspiral Carpets belong in venues of this size, their new material matches up with their past and needs to be heard alongside it.

Shed Seven pull absolutely no punches. Not for them a navel-gazing trip through their back catalogue, they know exactly what their audience want and they deliver it in spades and that goes most of the way to defining why this long after their heyday they can still pack out venues of this size and sell them out way in advance. They're a band that never quite got the credit they deserved, often derided as hanging on the tail of Britpop but when you line up their big singles one after the other as they do tonight, it's a mightily impressive arsenal they have with which to attack their detractors.

They play every one of their thirteen top forty hits in their eighteen song set and complete it with five of their best known album tracks that have made themselves live favourites over the years including the set closing Parallel Lines. There's times throughout where you can't hear the band or Rick just lets the audience take over - the closing Chasing Rainbows, the raucous abandon of Going For Gold or Disco Down or even the more subtle baggy-tinged Dolphin from their debut Change Giver that's stretched out mid-set, probably to give the energetic jack-in-a-box front man Rick Witter time to take a breath as he doesn't stop moving all evening. When he goes down to the front from Getting Better in the audience, he even jokes with a member of the crowd he gives the mic to about how bad their singing was. 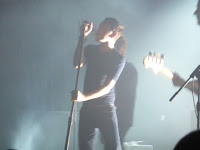 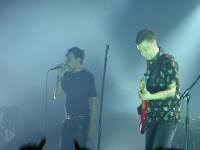 With the exception of adding a brass section for large parts of the set, there's no dressing the songs up in unnecessary frills, capturing exactly what their audience want. At the end of Long Time Dead, Rick tells us not to buy their debut album Change Giver and give money to Polydor, but to give it to him instead and you sense the band are here to cement people's memories of them with gigs that will stick long in the memory, but also to give an hour and a half of the best fun the crowd will have all year and have them coming back the following year.

There's no new material, but that would be missing the point of what Shed Seven are doing. They never went for the changes in artistic direction that the likes of the more art-school Pulp and Blur went for, preferring to keep going for the jugular and the set list is testament to how they succeeded in doing just that. The answer to anyone doubting them is the whole venue front to back singing along to every word of those singles that defined their transformation to adulthood. This is a celebration of a time and place, a recapturing of younger, more heady, pre-mortgage and kids days for the majority of the room and Shed Seven provide the perfect soundtrack for that.

Shed Seven played She Left Me On Friday, Casino Girl, Where Have You Been Tonight, Cry For Help, Devil In Your Shoes, Dolphin, Bully Boy, Long Time Dead, Disco Down, Speakeasy, Ocean Pie, High Hopes, On Standby, Going For Gold, Parallel Lines, Missing Out, Getting Better and Chasing Rainbows.