Track Of The Day : Thing - Carousel 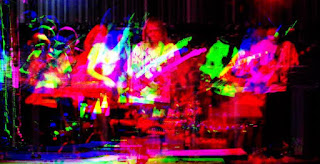 In a year where the word psychedelic has become the most overused word in musical vernacular, Thing come along on Christmas Day with a song that probably captures the vibe of the word, rather than the label, more than any song released all year. Carousel is the first track they've revealed, but immediately it marks them out as a band to keep a very close eye on in 2016.

The Stockport four-piece, that feature Joel Kay previously of Ruby Tuesday and currently of Ist Ist, have launched themselves in a low-key manner, playing their debut gig at the Night And Day just two days after revealing the track with little fanfare on the internet's quietest day of the year. Carousel gives you the impression of being on the ride such is the head-spinning impact of the song, vocals treated to accentuate their impact whilst the music swirls away behind and around it, wrapping itself around the words.

Email ThisBlogThis!Share to TwitterShare to FacebookShare to Pinterest
Labels: Thing