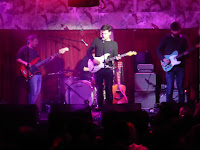 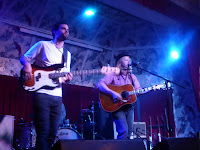 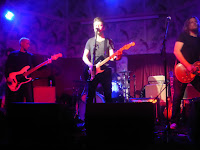 Bluebird Kid Clark are a band of Manchester legend. Always just under the radar they released three albums - Bottom Dollar, The Red Squirrel Revival and Live At The Weirworks - before disappearing only to be coaxed back out for a single release by Manchester label Scruff Of The Neck. Their headline set at the Deaf Institute was for the launch of a new single in a few weeks and support came from Little Mammoths and Darktown Jubilee.

Darktown Jubilee are one of the unsung heroes of the Manchester independent scene. They've recently released their belting second album City Of Light, which is full of the ambitious fearless anthems that should have them headlining places like this in their own right. All but two of the seven songs they play come from that record, including the title track and the set-opener lead single Falling Down.

In front man David Boardman they have a focal point whose energy is infectious and transmits itself to the growing crowd, and the strength of their songs is underlined by the fact that they're an exceptionally tight live band, the hooks and riffs hit at just the right time in just the right places to emphasize the power and empathy that runs through their songs. A thoroughly impressive start to the evening's proceedings. 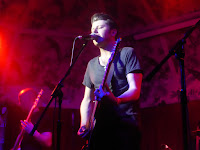 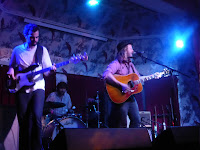 Little Mammoths are next up and they wear their Americana-influenced rock and roll influences proudly on their sleeves. Normally a six piece, they're stripped back down to a three-piece for tonight's show, but you'd never be able to tell such is the impact of the songs from their recently finished album. They're a band that have an obvious joy of playing live and an intuitive connection between each other that transmits itself to the audience as their set progresses.

Right from the start of their opening number Waitresses And Barmaids, their love of harmonies and melodies is evident. The songs vary in style, but have a cohesion and continuity of purpose that helps the set to build and bodes well for that album. There's a feel good factor to their sound, a warmth, humility and a courteous nod to their influences running throughout. 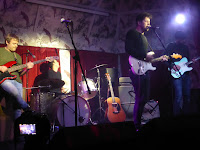 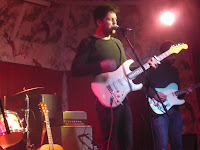 Other than a few festival appearances, Bluebird Kid Clark have been off the scene for several years now, front man Dave Fidler jokes that it's been a long case of writers block, but now they're back with some new songs and some selected tracks from their three albums. They start off with a beautifully simple track called Please Me Woman and immediately it's clear to see that the interaction between Dave's vocals and those of Sion Fitton are a key component in their sound. The song concludes in a hail of guitars as Dave, his brother Rob and Sion's bass take it to a different place from its start.

The beauty of Bluebird Kid Clark was always in the quality of their songwriting. Work Of Art is a song we've heard in an altogether different style with one of Dave's other bands, but it works equally well in a rock and roll band of boys as it does with the strings and keys of the all-female Corvettes. They're also a lot of fun as a live band, particularly Sion who repeatedly references his home town of Gee Cross to big cheers and when Dave jokingly rips into brother Andy on drums and cameraman Alex. River Mersey is a beautiful country-influenced track with the simple but ear worm chorus line of "Daddy was a boxer, Daddy was a painter" as well as infectious vocal harmonies.

It's not all new material though. Sun In The Morning from their 2010 debut Bottom Dollar is another example of their craftsmanship as guitars collide with drums and vocals combine to lift the song and Go To Sleep from their final Live At The Weirworks is a heart-meltingly beautiful tale of reassurance and love that Dave's more recently distilled into his solo sets.

The new single, now due out just before Christmas, is I'm Not The One and, like so many of Bluebird's songs, has a riff that will nestle itself in your head and uplifting and joyful vocal harmonies. It's vibrant, fresh and fun. As is Medley, three songs that were put together at the start of the Weirworks album to allow it to qualify as an EP, and Sea Life, which follows it on that record, a raucous rampant country-influenced beast of a song with a great breakdown section.

Easy Gone Easy Come is a song we've become extremely familiar with from Dave's solo shows and his album I'm Not Here, but it's further testament to the quality of these songs that it works equally well as a blues-infused stomp and it concludes the main set.

The encore starts with a song the band wrote for Rob's wedding earlier this year, a beautifully poignant and romantic acoustic song, before they plug the guitars back in for a run-through of The Faces' Glad And Sorry which they put the Bluebird stamp on, Dave and Sion's vocals again combining to accentuate the impact.  They finish with a bar room stomp that Sion takes the lead on (which he dedicates to Gee Cross) which is appropriately called Drinking Song. It's a perfectly apt song on which to end the evening as Bluebird Kid Clark are first and foremost a good time rock and roll band, even though they do show a far more sensitive and touching side at points throughout tonight's gig.