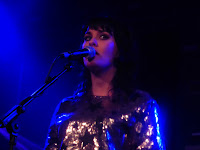 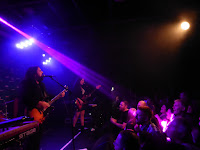 It's hard to believe it's ten years since The Magic Numbers debut album catapulted them from nowhere into the upper echelons of the charts with hits such as Forever Lost, Love Me Like You and Love's A Game. They've produced three fantastic albums since, but the self-titled debut is the one that sticks in most casual fans' memories. They're on tour revisiting that album in full and we caught their show at Gorilla in Manchester supported by Ren Harvieu as they rolled back the decade.

The old album in full format is one that divides opinions and we're not convinced by it, but when it comes to an album that defined a year of my life, I'm happy to make an exception. 2005 saw The Magic Numbers move from playing the likes of the intimate Bush Hall in February through a sold out in advance and prior to the album show at the Forum in May to two sold out nights at Shepherds Bush Empire in October and then on to Brixton Academy early in 2006. In total I saw them thirteen times that year from intimate in-stores to road trips on FA Cup Final day to Oxford and further flung places such as Liverpool and Reading. It was a meteoric rise, but one that had it roots in a decade of Romeo Stodart's songwriting, searching for the right formula with drummer Sean Gannon until they enlisted the help of their sisters Michele and Angela and The Magic Numbers were born.

They started by playing the album in full and in order. It's weird to hear the traditional set-closer of the time Mornings Eleven being played at the start and then it be followed by a string of hits that would generally hold up the end of their set (by the time the album was released they were already playing big chunks of album two as well as songs that didn't see the light of day), but that's how the record was sequenced with the more intimate stripped-back tracks later so that's how it would be played. That continues with the album's big hit single and their first calling card to the masses Forever Lost which immediately has the audience's hands raised clapping (mostly) in time and singing back every word, a theme that continues through a raucous version of The Mule. 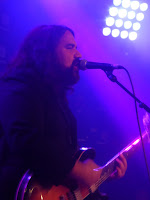 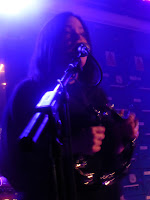 This isn't a simple turn up, plug in and recreate the album note for note though. What the cartoon imagery of the Forever Lost video, the sculpting of the band into models and the pure unadultered pop of that first hit single hides is that The Magic Numbers are a formidable rock and roll band when they let loose and The Mule and the subsequent head rush of Long Legs are testament to this. Similarly Love Me Like You, one of that trilogy of singles that cemented them in the hearts of the British public a decade ago, is a song of joyful abandon, but one which they twist and stretch in the search of adding a new vibe or a new groove to it to keep it sounding fresh and invigorated.

The album draws its breath at this point, as do the rest of us, for a beautiful Which Way To Happy, proof that when they slow things down the harmonies between Romeo, Michele and Angela are something that can make even the most stubborn heart melt and which is a world apart from what's gone before it. Angela gets one of the biggest cheers of the evening as she duets with Romeo on the love/hate tale of I See You, You See Me. It's always been a mystery to us why she hasn't released a solo record at some point as her voice is one that stops you in your tracks, it looks effortless as she delivers it but the impact as it soars and drops and twangs the heartstrings is undeniably powerful. Those harmonies make Don't Give Up The Fight feel so uplifting, so romantic even against the backdrop of Gorilla's overbearing air conditioning system that can be heard in the quieter moments of songs.

Romeo tells us how This Love was written about his and Michele's grandmother who died in New York and they weren't able to attend the funeral so he wrote a song instead. He has issues with his acoustic guitar and after two attempts he switches to his electric, which gives the song an even more eerie poignancy as the audience respectfully quieten down and listen to the eulogy of the song. No Magic Numbers gig would be complete without audience participation though and a number are invited up on stage to sing Wheels On Fire with them. It's a song of community and this gesture helps to make the song exactly that.

Love's A Game picks the pace back up again and is stretched out and twisted into a wonderful soulful track full of harmonies. As you listen to them live you can hear their love of the likes of Neil Young in songs, but also Romeo and Michele's Caribbean roots as well. They finish the first part of the set with the album's closing track Try, which hints at gospel in parts when those vocal harmonies lift it. It's been ten years since the album came out, but tonight's performance makes it feel like ten minutes, so invigorating is the way they've approached it, which could be a lesson for many bands that treat this format as a cash in rather than a chance to reassess and reinvent.

After a short break they come back and start the encore section of the show with two songs from last year's Alias album. What Shot In The Dark and the Angela-sung Thought I Wasn't Ready immediately show is that there's been no dilution of The Magic Numbers' creative juices over time. They've suffered at the hands of the press (because they don't look cool and that's oh so important), they haven't simply created offspring of Forever Lost ad nauseam and of course the fashion business that is the music industry moves on to the next big thing. Shot In The Dark was a perfect return for them, a surefire hit in a different age, full of the vibe and energy that shot them into the public conscience ten years ago and tonight it's stretched, tugged at the seams and transformed into a beast of a song. 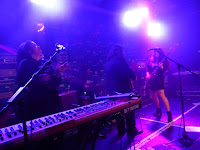 The Magic Numbers' love of the musical past has never been a secret. They've covered the likes of Springsteen and Neil Young regularly in the past and tonight they pay homage, firstly by inviting Ren Harvieu on stage to join them in a cover of Springsteen's I'm On Fire. They then invite Ren's band and a whole number of other guests on stage for a rendition of Neil Young's Harvest Moon which sees drummer Sean take centre stage for a harmonica solo mid-song and the five hundred or so in the venue joining in for a communal sing along as the song's signature riff rang out around the room.

We're then treated to The Magic Numbers' very own Christmas song. As you can tell from the title I Don't Care If It's Christmas, it's not your traditional mistletoe and wine carol with talk of "useless presents" and "honey honey, the bells are ringing out, funny how the snow feels colder now" but it still bears all those traits of harmonies and melody that make it unmistakably a Magic Numbers song.

They bring things to an end with their debut single Hymn For Her, originally a hidden track on the debut album but a much sought after rarity in its 7" form. It starts off quietly with xylophones ringing out, eerily so, before exploding into a cacophony of noise. It's a fitting way to bring the evening to a close.

Opening the evening was Salford's Ren Harvieu. Her set was interrupted mid-way through by an audience member fainting and needing attention during a cover of Joni Mitchell's The River, but before that she treated us to three songs from her debut album Through The Night, which feels like an age since she released as well as a new track You Don't Know Me, which was co-written by Romeo and hopefully a sign that her second album isn't too far away.

As ever with Ren, you're immediately struck by that voice. The shy and nervous girl goes away when she starts to sing. She's in possession of possibly the finest voice you're likely to hear at the moment, emotion pours out of every word she sings irrespective of the pace or subject matter of the song and the crowd around us are stunned into silence. Hopefully 2016 will see her second album and the recognition she deserves.

The Magic Numbers played Mornings Eleven, Forever Lost, The Mule, Long Legs, Love Me Like You, Which Way To Happy, I See You You See Me, Don't Give Up The Fight, This Love, Wheels On Fire, Love's A Game, Try, Shot In The Dark, Thought I Wasn't Ready, I'm On Fire, Harvest Moon, I Don't Care If It's Christmas and Hymn For Her.