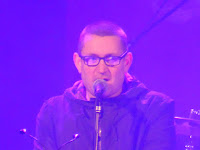 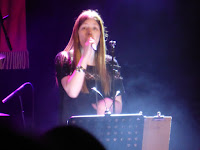 Hope For Christmas II is the second year of Paul Heaton and Jacqui Abbott's solidarity show at Manchester Academy 2 with proceeds to Hatfield Miners and the CALM charity which aims to try and prevent male suicide. The audience were also encouraged to bring along donations for local food banks to support them at this time of the year. Paul and Jacqui proceeded to play a two-hour set that spanned most of Paul's career with The Housemartins, The Beautiful South and the current band set-up with Jacqui.

Paul Heaton is a man of principle. Whilst others talk glibly about supporting causes, his actions do his talking for him, from the huge Hatfield Miners flag that stands proudly overlooking the stage where he tells us how as a young Hull musician he went to their picket lines during the Miners' Strike of the eighties and formed a bond that lasts to this day, through the GMB union stand in the foyer (Paul has union discounts in his Kings Arms pub in Salford) to the support for CALM, recognising suicide as the silent main killer of middle-aged men in this country. Even now that fire burns deep, the set-closing Heatongrad, which ends up sounding like a bizarrely brilliant Russian waltz in the breakdown, is a venomous attack on the elite systems of the country and how he would dismantle them.

The set naturally features eight songs from this year's Wisdom, Lines and Laughter album and these don't feel out of place amongst the huge hits and age-old crowd favourites that surround it and show that the creative juices of Paul and his co-writer and guitarist Johnny Lexus are showing no signs of diluting. The songs are full of the same ascerbic witty observations of social and political interaction that Paul has traded in for decades now from the gender politics of the set-opener (Man Is) The Biggest Bitch, the slow fade of a relationship in When Love For A Woman Dies, the tense musical drama of The Austerity Of Love or the venom of the aforementioned Heatongrad where he reminds us all that we should never forget our roots.

Paul and Jacqui sing some songs individually and others together and it's important not to downplay Jacqui's contribution here to the whole project. The best singers always make it look so effortless and Jacqui does just that, no drama, none of that silly posturing you see on X Factor, she just opens her lungs and lets go and what comes out is worth a million wannabes, Rotterdam being one of the prime examples tonight.

Paul's also quick to commend the rest of his band and tell us this is probably the most fun they've ever had, joking that it's because Jacqui is older and he's sober, but Pete on drums, Chris on bass and Kenny on piano and trumpet as well as Johnny are the reason these songs still sound musically vital, refreshed, reinvigorated and not tired pastiches of the past. He's also on good form, asking for recipe advice for their appearance on Sunday Brunch as he didn't think sandwiches and chips or sausage and chips would go down too well. 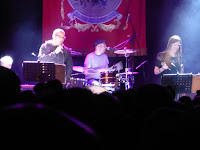 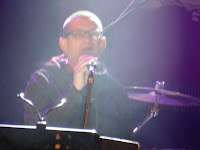 As a result those Housemartins songs - Five Get Over Excited, Caravan Of Love, Happy Hour and Me And The Farmer - are given new life and The Beautiful South songs, particularly those which they both sing, are greeted like old favourites and sung back to them word for word and at points the audience are given leave to do so unaccompanied. The sound of 1,500 or so forty-somethings, mostly in couples, singing "don't marry her, fuck me" has some sort of bizarre irony to it as does the put down to body shamers that is Perfect 10 that was years ahead of its time.

With dates at Manchester Apollo and Delamere Forest in the pipeline, there's no need for Heaton and Abbott to play this show other than to make a difference. Whilst those in the room might not be the beneficiaries of this generosity, the fact that musicians are still trying to make a difference these days is a refreshing one. Four thousand plus items for the food banks tells its own story before the funds for CALM and Hatfield are counted. It's great to see that even in these austere times and with society ever more becoming about greed and self-interest that someone still cares.

Paul and Jacqui played (Man Is) The Biggest Bitch, How Long's A Tear Take To Dry, The Queen Of Soho, Prettiest Eyes, The Horse And Groom, Five Get Over Excited, Rotterdam, When Love For A Woman Dies, Caravan Of Love, Old Red Eyes Is Back, I Don't See Them, Sundial In The Shade, One Last Love Song, The People Who Grinned Themselves To Death, DIY, Hold On To What, Me And The Farmer, Don't Marry Her, Heatongrad, You Keep It All In, Happy Hour, The Austerity Of Love and Perfect 10.