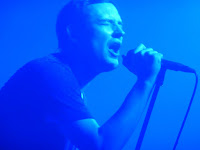 As a music fan one of the joys is constant discovery, suddenly finding a band that passed you by. Before tonight I'd listened to The Twilight Sad, but never really got them, never really felt the connection. Stood next to a mate who felt the same way, they changed that in an absolutely spellbinding ninety minutes of some of the most ferocious intense and raw music I've ever witnessed.

This is The Twilight Sad's biggest Manchester show they tell us and Gorilla is pretty much full, but it's little in comparison to the fact they've already sold out the 2,000 capacity Barrowlands back in Glasgow this weekend, and there's the small fact that they've been booked to support The Cure on their world tour for pretty much the whole of next year. However, you immediately sense that they don't do things in half measures, in small sizes, The Twilight Sad are a band of all or nothing, and they give you everything.

Right from the start, there's a ferocity to the whole thing. Drums almost sound metallic, guitars combine to create a fierce all-encompassing roar, there's so much dry ice it's hard to see and the lights are so intense in both their power and the stuttering flashing nature that they're the only thing that can cut through the fog. And then there's James Graham, their leader and seldom has a front man made such an impression on the crowd. He loses himself completely in what's going on up on stage as if the whole world is concentrated in that couple of hundred square feet for the duration. Every beat, every note feels like it's his lifeblood and without it he'd cease to exist. He notes the influence Manchester has had on the band and you see the likeness to the grainy footage we have of the likes of Ian Curtis and the Tim Booth of very early James in the way he's transported to his own world. At the end of the songs he greets the crowd, almost in celebration that we've all made it through the apocalypse of the song whilst his band mates look on, saying nothing, looking nonchalant, but all part of this intense assault on the audience's senses. 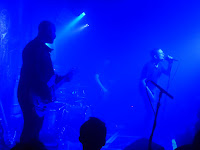 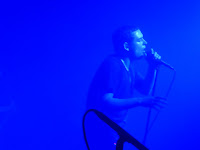 Plenty of bands never quite manage to translate the energy, the vigour and the thrill of their live set to the recorded medium, but tonight gives us a point to go back and reevaluate this band. There's no let up at all throughout other than the short breath for air between songs. They're loud, just on the brink of distortion but not quite tipping over the edge. It's a fight for Graham to get heard through the tsunami of sound coming from his band mates, but he does it and he means every single word of it. As I Became A Prostitute hits the breakdown, he teeters close to the edge of the stage and implores us all to do something, quite what we're not sure, but it's a call to immerse ourselves even further into what's going on up on stage.

From coming with no real expectations, The Twilight Sad utterly blew me away to the point I was eagerly looking for suggestions from my friend who does the whole travelling routine with them as to where to start again. My ears are still ringing, I think some of the lighting is engraved on my iris, but whilst that might fade, this gig won't for a long time.

The Twilight Sad played There's A Girl In The Corner, Last January, Dead City, That Summer At Home I Had Become The Invisible Boy, Drown So I Can Watch, I Became A Prostitute, Alphabet, In Nowheres, Nobody Wants To Be Here And Nobody Wants To Leave, Seven Years Of Letters, Reflection Of The Television, I Could Give You All That You Don't Want, Cold Days From The Birdhouse, Nil, The Wrong Car, It Was Never The Same and And She Would Darken The Memory

Thanks to the wonderful Wrong Car fan-site for the translation of the set list into song titles.