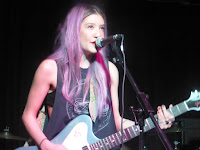 One of the last gigs of the year happened to also be the most singularly raw chaotic off the edge one that we've witnessed all year. Queen Kwong came to Manchester for the first, and hopefully not last (although we wouldn't blame Carré if she never came back), time and left a trail of photographers and a vexed mobile phone owner in her and her band's wake.

Pretty much everything that could go wrong went wrong early in the gig. Firstly the whole set had to be built as Queen Kwong used a completely different set up to the supports and during the start of the first song Pet, Carré's vocals didn't come through in the mix straight off and even when fixed remained problematic all night, admittedly not helped by her insistence on bringing the gig to her audience performing in the middle of a static crowd and a huge group of photographers, Fred Sablan's bass strings give way in the second song and the lights are almost blinding those on stage until a stepladder is brought out to remedy that situation half way through.

You'd almost forgive Carré and the boys for giving this up as a bad shot, playing the gig and getting the hell out, but the exact opposite happens and we witness the most intense, fierce and confrontational gig of the whole year. Carré spends half the gig making her way through the statues, avoiding the camera flashes, down on her knees channeling every bit of passion, letting loose in a whirlwind of bodily expression in the instrumental sections of songs, going through us to the back of the room as if life and death hinged on the outcome of the show.

At one point she approaches two girls, one of whom has been texting constantly throughout the gig, takes the phone, texts something and then puts it in her back pocket, leaving the girl perplexed and flummoxed as it's not returned until after the show. It's a brilliant fuck you to the modern gig going crowd, something that more artists should be brave enough to do. This music demands respect. Give it some for crying out loud. 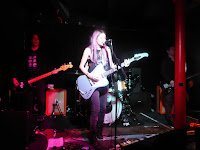 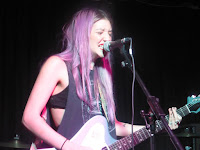 The set features heavily around her Get A Witness album, but even the raw energy of the recorded versions of these songs pale when faced with the live show. From Hayden's drums which propel the whole thing along and Wes's guitar and Fred's bass which create the intense canvas across which Carré performs her vocal acrobatics, this is a band that absolutely refuses to play the songs straight. It could all come crashing down at any point, but that's what makes this show so spectacular, it doesn't nod to the conventions of your rock and roll show, it doesn't even try to impress its audience by showing off or neat tricks, it's in your face, eyeball to eyeball, cheek to cheek and it isn't going to back down. The set finishes with Wes's guitar placed on a roof rafter and the band storming off stage, leaving Carré to breathlessly finish the final song off and it feels like the perfect denouement.

We'd been asking Carré on social media to come to Manchester every time she'd toured and played London only. We felt a little embarrassed by the turnout and the reaction if we're being honest, because we haven't seen a single show this year where the artists have given so much and received so little back. We only hope that they'll come back and get the proper reception that such a performance deserves.

Get A Witness is available digitally from Amazon and iTunes.