Track Of The Day : Heavy On The Magic - The Bug 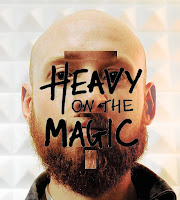 The Bug is the second track revealed by Manchester's Heavy On The Magic ahead of their final show of the year at Gullivers on December 12th. The song contains all the elements you'd expect from Chris Haddon and his bunch of merry men, but still manages to sound raw and fresh.

Heavy On The Magic can be found on Facebook and Twitter. They play a headline show of their own at Gullivers on December 12.