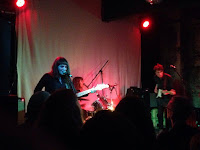 To promote their debut single Sleeper Our Girl have played two dates. The first was in London and a second in their home town of Brighton. Although the single was not due out for another two days, there is a big enough buzz about them that the venue is packed out on a Wednesday night. Our man in the South, Starter, went along to watch his favourite new band.

After tuning up on stage and with a quick nod to the sound desk to cut the DJ, Our Girl launch straight into a wall of sound which is the opening chords of Pride. This is not a song to gently ease the crowd in, but a song which gets the attention of everyone and gets heads nodding in unison immediately. This is a song that the lazy would call Shoegazing, but it has a warped finish that Tom Waits would be proud of, and he is the last person to associate with that genre.

This is followed by the slower starting It's A Lot which has Soph playing her guitar dreamily while her singing is Anna Calvi-seque. Yet the song changes tempo and finishes with an unexpected hard rock finish which leaves Lauren on the drums calling for water.

Our Girl, like any new band, do not have a huge back catalogue to call on, but what they do have is an album worth of their own material and they have no filler songs. They have no one telling them how to write songs, but are writing them from the heart. You can feel this and the influence of The Pixies in the way that the song Our Girl begins with its dreamy start before a sudden feedback surge lurches into heavy rock and also Whatever which would not have been out of place on Come On Pilgrim.

Two Life has as many peaks and troughs as the PJ Harvey back catalogue, but finishes with Lauren bouncing on her drum stool while Josh crosses the stage playing his bass while hunched over it, but clearly loving every second. Level has an acoustic start which builds up to the point that the students at the front are forming a small mosh pit. They play the song 'Sleeper', which is being released as the single, without any fanfare or announcement. The set finishes with Boring. A song that has Soph smiling at a memory every time she sings the chorus line "Unless I change my mind, I tell you all the time".

It is a long time since I have seen a band at this level which has the sound and presence to be filling a 5,000 capacity venue. Our Girl are that band.

Email ThisBlogThis!Share to TwitterShare to FacebookShare to Pinterest
Labels: Our Girl