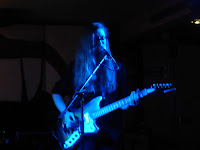 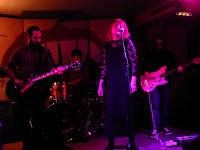 Luckless's Vindication Blues album is probably our favourite discovery of the year shortly after she played Manchester at A Carefully Planned Festival. With a few days off work and friends in the city, we made the trip up to Edinburgh to see her at Henry's Cellar Bar playing tracks off the album as well as two impressive new songs.

Henry's Cellar Bar is a great little venue, intimate with a great sound system and an engineer that knows exactly what she's doing. It's therefore an ideal place, other than the small turnout, for us to watch Ivy (for she is Luckless on this never-ending solo jaunt around Europe) for the first time transform the delicate intimacy and exploration of dark spaces and times into a live set.

The set starts with a piercing guitar and loops are then built around it to form the start of the album's opening track Telephone Song and in this dark Edinburgh basement with Ivy performing it on her own thousands of miles away from home, it's even more tense and balancing on a tightrope than it is on the album, an expulsion of feelings in front of complete strangers. Even the chatterers on the table behind us are momentarily silenced. Next up is When You Asked Her To Stay, the album's lead track, one that's more tricky to convert to the solo format, but clever use of the pedals and loops mean that the song doesn't lose any of its ferocity and you can hear the emotion ripping in Ivy's voice as she tells us the story.

Ivy's incredibly talkative, joking with us at points but also speaking intelligently about the situation in Syria and people here and back in her native New Zealand not helping with the refugee situation, joking they have four million people and forty million sheep, and tells us about the background of the next song she plays. No Civil War, which she's recently released with all receipts going to Medecins Sans Frontieres. It's the fiercest and angriest we hear her tonight, a proper heartfelt song about the situation rather than empty posturing, it pours out in her voice but also the guitar.

Given we're new converts to Vindication Blues, it feels odd to hear another new song, but the album's eighteen months old in the real world so we shouldn't be shocked. The as-yet-untitled track talks of the city being cold and thinking of home, no surprise given she's been living and touring the other side of the world this year and has all the intensity that made us fall in love with the album. 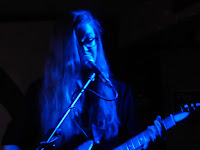 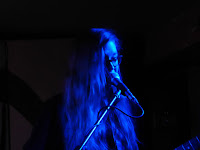 Ivy finishes off with the seven minutes of Tired Of Being Blue which starts with a raw jagged guitar over which she squeezes every last drain of emotion out as she declares she's "tired of fighting" as if the song is her form of catharsis before losing herself in a looped guitar world until the song drops down to its conclusion. It's stunning and we're left wondering why she's travelling around opening shows in venues this small when she deserves a much wider audience for these songs.

We did intend to leave after her set but Fine Creature came on almost immediately. If we're being honest (as we always are) we'd watched a video on You Tube and were apprehensive, but it does them absolutely no real favours at all as they're actually far better than we expected. They're led by Gloria, a red head who channels both Siouxsie And The Banshees and The Cocteau Twins, but does it with a slight awkwardness (not in a bad way) that makes them intriguing to watch.

Their songs have guitars played with a violin bow, big evocative canvases such as the start of opening track You Walk, the whole of the second track Turn Cold or the threatening tones of Creep. It allows Gloria the space to use the full range of her voice as well as to add dramatic moves to accompany it. They're intense in the delivery of their songs, adventurous in their scope and slightly menacing in their execution. That video didn't do them justice.