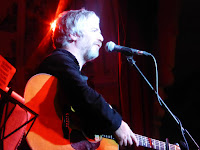 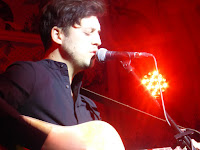 John Bramwell's never-ending solo tour finally made its way to Manchester last night at the intimate surroundings of The Deaf Institute for a career-spanning set, accompanied in parts by cello, keyboards and accordian, mixed in with plenty of humorous stories and crowd interaction. Support came from Dave Fidler.

Dave Fidler has been opening on John's solo dates for over a year now and it's immediately apparent why John holds him in such high regard. As well as crafting some beautifully poignant lyrics, his guitar playing is exceptional in its detail and complexity, take his instrumental tribute to Tommy Emanuel, simply entitled Tommy as an example. It's a brave move for any support artist playing on their own to risk an instrumental mid-set, but Dave's playing is so accomplished that the size of the audience's roar at its conclusion tells you everything you need to know. 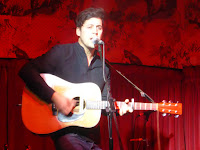 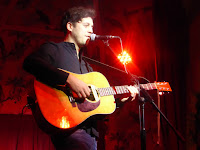 The rest of his set features five songs from his wonderful debut album I'm Not Here as well as a new song called Love Listens. As it finishes the gentleman stood next to me says to no one in particular "that was beautiful" and he's right. Its signature line is plaintive, but hits the mark as he exclaims that "money talks, but love listens" and it's that simplicity married with the ability to craft that into something poignant at the same time that explains Dave's appeal. He writes songs about the difficult birth of his daughter or the death of his father but expresses them in a way that anyone who has been through difficult times will be able to relate to. And as music is one of life's great healers people warm to that and the reception he gets throughout, as well as the rapt attention of the crowd which is a rarity at acoustic shows in this city for a headline slot let alone a support act, is testament to the quality of his songs and the way in which he delivers them. 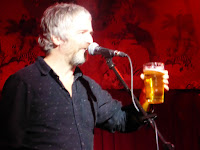 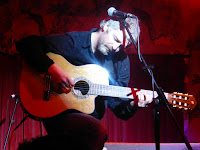 Remarkably given he's been on the road for over a year, this is John's first solo Manchester show in that time and he couldn't have chosen a better venue than the Deaf Institute. The picturesque surroundings, the crystal clear sound, the shimmering mirrorball and an attentive Sunday night crowd meant that this show was about the music and the music alone rather than the assorted rigmarole that usually comes with any artist's hometown show.

What this does is cast the stark, slightly menacing beauty of John's work into sharp focus. There's no hiding behind a band and a gap between the audience and artist. This is music at its most on edge, it's most raw and when you listen to what is being sung these are dark tales, self-deprecating with an honesty and openness that only comes from having lived hard times and come out the other side. You sense John thrives in this type of environment rather than the larger stages that I Am Kloot visited in their Mercury nomination and top ten album phase, a chance to look his crowd square in the eye.

The set covers most of his career with Kloot and it's refreshing to note that the audience seem as familiar with the early work as they do with the more (commercially) successful later phase. Naturally, Northern Skies and Proof, which bring up the rear of the set, do generate the inevitable audience singalong, but for the remainder the audience listen in hushed and reverent appreciation. There's a minor incident where John has to chastise a gentleman who insists on singing lines of Because between every song in the hope of him playing it. Those games don't wash though and sensing the crowd are irked offers the guy his money back if he wants to leave because he's not hearing what he wants. Under other circumstances this might come across as excessive, but John had already by this point taken two more polite requests from the audience.

For part of the set John is accompanied by Alan on keyboards and accordian and Harriet on cello. Both exceptionally gifted musicians with an intrinsic understanding of what makes John's songs so touching and affecting, they decorate the songs with light and shade particularly The Same Deep Water As Me and To The Brink, adding subtlety to them where sometimes they've been drowned in the past by adding other musicians. For the encore he invites Dave Fidler back on stage too as the four of them perform an eerie version of Lately. He also tries out new arrangements of songs - Ferris Wheels is distilled from a raw thrilling roller coaster ride off the Moolah Rouge album into something so intimate and delicate that you feel it could snap at any moment, similarly the opening song Bigger Wheels. 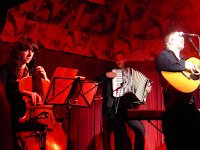 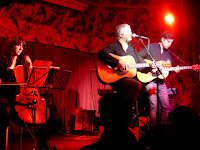 John is on particularly good form tonight between songs as well once he stops wondering if he went too far with the heckler. He tells stories of listening to newly recorded songs in the car and having to stop, of taking his daughter out of school to go to the beach and his mum's reaction to some of his lyrics, knowing that we've all heard them before, thanking us that no one ruins the punchline and promising us some new ones in about five years time. He jokes that his setlist preparation is done six minutes before going on stage and he's spilled beer on it before he's even started and put it on the floor where he can't read it. He laughs that Some Better Day was his attempt at writing something uplifting, but he still triumphed in pulling it down at the end.

This set of shows strip music back to its bare bones, whether it be one man and his guitar or with accompaniment that embellishes the songs and enhances the contrast between these raw and the recorded versions. It's rare to witness one of the finest songwriters of this generation in such intimate surroundings and with such humility and complete lack of pretense.

John Bramwell played Bigger Wheels, Mouth On Me, I Believe, Gods And Monsters, No Fear Of Falling, I Still Do, Morning Rain, Titanic, Ferris Wheels, Masquerade, At The Sea, The Moon Is A Blind Eye, The Same Deep Water As Me, Fingerprints, To The Brink, 86 TVs, Bullets, Some Better Day, From Your Favourite Sky, Shoeless, Northern Skies, Proof and Lately.

His tour continues, with Dave supporting, at the following venues

Email ThisBlogThis!Share to TwitterShare to FacebookShare to Pinterest
Labels: Dave Fidler, I Am Kloot, John Bramwell