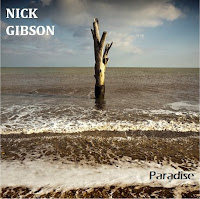 Nick Gibson’s third EP Paradise is a set of five songs that deal with day to day feelings that most of us can relate to. Songs that talk of the day to day drudgery of scrimping and earning a wage to survive, feelings of loneliness, falling in love and relationship uncertainty.

Paradise deals with that old feeling we’ve all experienced at some time, working for a living in a job that’s getting us down, the opening lines “feel the evening calls to set me free, day brings the night that sinks what’s left for me and I feel like going crazy again, tell me why this is just a means to an end” will be something we can all relate to. It’s couched in positivity though once the chorus kicks in, that there’s somewhere (paradise) to escape to and the music creates a dramatic atmosphere.

“Do you know what it’s like to be lonely?” is the explicit opening gambit of Do You Know, an exploration of solitude, but which the music, in particular a rather wonderful keyboard line that dances throughout from the first chorus, imbues with a positivity that contradicts the lyrics, a sense that everything is going to be alright.

The One is one of the most unashamed and open love songs we’ve heard in a long time, the chorus concluding simply “you are the one for me”, whilst the verses talk in specifics, starting with a reflection of the situation before meeting the song’s subject, before declaring “you are the light for me, yes, you are the one for me.”  Like all great love songs though, it keeps the saccharine in check, but its message is clear and unambiguous.

Did You Get The Message takes a slightly different tack and is probably the one track of the five that doesn’t quite affect us in the same way and doesn’t fit in with the other four. It moves away from the style of the other four songs to something a little looser, particularly in the verses where the words are more spoken that sung. There’s nothing wrong with it in its own right, just that it sits a little out of kilter with what’s around it.

Nick saves our favourite for last. Cold Summer returns to the positivity of The One declaring “when I look in your eyes I feel my temperature rise, never go home, never leave, because you are what I need” before turning the song on its head and declaring that he’ll reciprocate.  The chorus is bathed in positivity and leaves the listener at the end of the EP with a warm glow.

Paradise is a great collection of songs, simple in their construction albeit with subtle little flourishes here and there to mark Nick’s personality and creativity on them, allowing the emotions contained therein to take centre stage and for the listener to engage in them because whilst Nick may be singing about specifics, they are ones that all of us feel at some point.  It makes no bold statements neither does it try to bowl you over with ambition, it’s open and honest and that’s what makes it something you’ll go back to over and over again.