Track Of The Day : Altar Flowers - So Happy 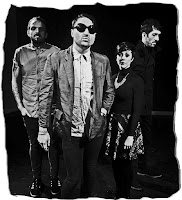 So Happy is the new track from Altar Flowers, one of our tips for 2015. They've spent the year recording their debut album I.D.S.T which should see a release in April 2016 and ahead of that they're releasing a series of tracks from it as a taster, of which So Happy is the first.

Altar Flowers are Jay Gibb, Charlotte Hughes, Paul James and Gaylord Knott and initially formed as LVLS before changing their name earlier this year. So Happy is a song with a big ambitious chorus and a beautiful end section where Jay and Charlotte's voices combine.

Altar Flowers headline the Black Heart in Camden on February 4th and Night And Day in Manchester on February 6 next year.