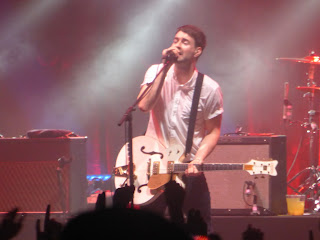 For a band with many detractors, those that say they can only sell out shows in Manchester, that they are a one-trick pony with big anthems and nothing else, those that don't like Liam Fray's hair or more recently that he took umbrage at having a smoke bomb thrown at him by someone with the IQ of a foetus, Courteeners have sold out seven nights at Manchester Apollo in the blink of an eye. We went along to the first night to witness a band that's undisputably one of the people and not of the middle class press and naysayers that look down their nose at them.

Seven sold out nights at the Apollo that stopped before you know actually how many they could sell out. Sold out immediately to a fan base so fervent that it's actually developed a personality of its own, one that's misguided in parts with the ridicule directed at Liam Fray by idiots that think it's part of a front man's responsibility to have a smoke bomb thrown at him and not to react. Fortunately, there's no such shenanigans tonight, just a demonstration of why at least in this city of ours Courteeners are a vital part of the cultural fabric.

The set is heavily focused towards the start of Courteeners' journey with their debut St Jude and its follow-up Falcon making up the bulk of the set, but what they demonstrate throughout from opening track Are You In Love With A Notion through to Beautiful Head which preludes the inevitable apocalyptic conclusion of Not Nineteen Forever and What Took You So Long via the likes of How Good It Was, Small Bones and Next Time You Call is that they've never lost the knack of fashioning a tune and story that talks to their audience, just that they might have grown quicker than some elements of that audience has matured. The Apollo bouncing from front to back for most of the evening tells its own story. Where the uncharacteristically poor Apollo sound lets them down, such as on Please Don't or Smiths Disco, the audience take over, drowning out and making unnecessary any attempts at rectification. 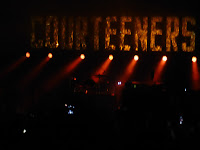 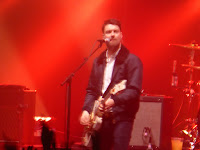 For a band that at least in Manchester are so deified there's a humility to the evening's proceedings, whether it be the moment Liam talks of all the bands he idolised that he'd seen in the Apollo - Ian Brown, The Strokes and Oasis - almost as laying down a challenge to those in the audience to make the same statements five years hence, the impassioned plea not to treat the city's homeless like shit and to talk to them before their new single Winter Wonderland which aims to help Shelter help those people or when at the start of Here Comes The Young Men he indirectly references the departed Mark Cuppello by dedicating to anyone who "loves The Courteeners or loved being in The Courteeners" or when he finishes the song jumping down in the pit to share his plectrum with a member of the crowd. They also nod to the city's musical legends and those that have influenced them, mixing The Stone Roses' Standing Here into Please Don't and James' Tomorrow into What Took You So Long for good measure.

The set finishes with the inevitable duo of Not Nineteen Forever, now a terrace football anthem for the red side of town, and What Took You So Long that leaves the Apollo departing singing along to the song's refrain as they had done from entering the building and almost drowning out the support bands singing. There's the inevitable flare in the crowd that security deal with promptly without great fuss during the latter that dissipates any potential issue. 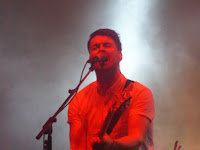 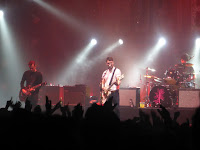 There's a unique bond between Manchester and The Courteeners, one that means they can sell 35,000 tickets here in a morning and struggle to sell a tenth of that in London, but that's because their songs form a connection between band and audience that's unmistakeably Northern (rather than Mancunian). They sing about our lives, our experiences and our feelings and that's why they're so loved.

Courteeners played Are You In Love With A Notion?, Cavorting, Acrylic, Kings Of The New Road, How Good It Was, Please Don't, Lose Control, Bide Your Time, Sycophant, Winter Wonderland, Take Over The World, Small Bones, Three Months, No You Didn't And No You Don't, Smiths Disco, Next Time You Call, Here Come The Young Men, Beautiful Head, Not Nineteen Forever and What Took You So Long?