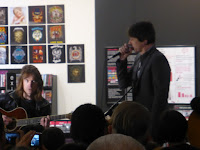 "Thank you for coming to this extra-ordinary event" deadpans Brett Anderson before the final song Beautiful Ones, trying not to laugh. But the surroundings do make this gig, one of a series to launch their new album Night Thoughts, just that. Stripped back to a three-piece Suede delighted the 200 or so assembled fans with a mix of four tracks from the album and six classics from their back catalogue.

Recent single Outsiders opens up the set and despite being stripped of the dramatic production of the album, it still hits the mark. For an in-store the sound is surprisingly crisp and sweet and the intimacy accentuates every single nuance in Brett's voice. Like Kids, probably the moment on Night Thoughts that echoes back most to those big hits of the nineties, feels similarly bare in this strange environment, but its nakedness reveals that timeless classic songwriting core that sits under all Suede's best work. It's always difficult to assess a record that's only been out twenty-four hours and Night Thoughts took us a couple of listens to get, but these first two songs will fit snugly into Suede sets for many a year to come.

Brett then sits down, making it even more difficult for us to see him as the stage isn't more than a few inches high, and the album's closing epic, and possibly our favourite track, The Fur And The Feathers, really does have its layers peeled back to expose the genesis of the song. It has an almost cathartic end-of-the-world feel to it, even without its grand production on the record.

There's already been a few calls for some more familiar material and Suede do deliver on this, possibly conscious that this isn't necessarily the best environment to reveal this record live to Manchester, and that we're all holding the album in our hands. There's acoustic runs at some of their biggest hits - The Wild Ones, Trash, So Young, Animal Nitrate and Beautiful Ones - as well as the majestically cloying and desperate Dog Man Star track Still Life that get some of the crowd singing along. Perversely Brett turns his back on us for most of The Wild Ones, not sure why, but no one seems to mind particularly.

Sandwiched in between these are Tightrope and it stands up strong in comparison to what's around it in the set, always the hallmark of a band that still has the creative spark burning at its heart. It wears the hallmarks of classic Suede - heartfelt intense lyrics at its core - but still feels somehow contemporary at a time where the world mourns possibly the biggest influence on them.

As Beautiful Ones reaches its soaring conclusion and the crowd mouth along politely to the refrain, unsure as how to react surrounded by CD shelves with little space to move, we reflect on how reassuring it is that the bands that defined our generation are mostly still with us and those that are creating new music rather than resting on their laurels are doing it with the same vigour and passion as they did when we were all a lot younger.