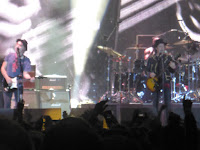 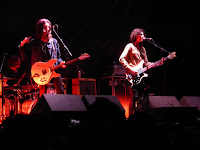 After the disappointment of a late postponement of their Ritz show last year, The Libertines plan to make up for it was this show at the Arena, a big challenge for a band at its best when you can see the whites of their eyes. Despite the lack of intimacy they still managed to pull off a show that matched the best of their past with last year's comeback Anthems For Doomed Youth. Support came from the North West's surefire bet for success in 2016 Blossoms and Reverend And The Makers.

We missed most of Reverend And The Makers set trying to get into the venue, but caught the final trio of Heavyweight Champion Of The World, Miss Brown and the brass-driven Silence Is Talking. Like the headliners they're a band at their best close up and personal, but the response at the end of the set suggests that they've still got the tunes to take on other people's crowds and win them over.

You sense already that this could be a dress rehearsal for Blossoms, that this is the size of venue they could find themselves in given a couple of years and a continuation of the trajectory they're taking. Full of confidence with having their debut album in the bag this week, their seven-song set is both brimming with their singles to date, but also enough variety to mark them out from many of the one-trick ponies that end up being indie flavour of the month these days. Blow, Cut Me And I'll Bleed, Blown Rose, Charlemagne and their most recent At Most A Kiss are five songs that any band with a multi-album career behind them would kill to have had over the course of it, yet these have been revealed even before the debut album has been announced. 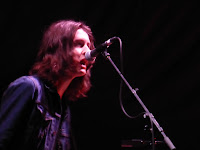 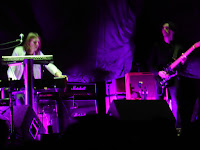 They dismiss any concerns that the stage might be too big for them as well. They exude a justified confidence throughout the set and each time we see Tom you see further development from that shy nervous front man of their early gigs on the circuit a stones' throw from here into the future poster boy for the indie kids he's becoming. Add to that the groove that Charlie on bass and Josh on guitar lock into, Myles' inimitable swirling keyboards and Joe's drums that, at the start of the throbbing thrilling Smoke, beat in time with your heart and they are already armed with everything they need. Even the more fragile My Favourite Room has a toughness to it that allows it to survive in this cavernous environment. Although this support slot was only announced after standing tickets were sold out, there are people around singing every word to every song - a real change from other such opening sets we've witnessed as they hone their craft on these stages. There's a sense now that Blossoms can be as big as they want to be - and that they'll do it without compromising those things that made us love them in the first place.

We've always been in two minds about The Libertines, mainly because of the circus and hyperbole that surrounds them at seemingly every turn, but you can't deny the adulation that they inspire and the way that they've given London the only real scene it's had for decades. At points tonight you can see where that devotion that's reserved in these parts for Courteeners could equally be directed to this bunch of southern reprobates. They don't over complicate their songs, often sparse and low-fi in their execution, but much more powerful as music for their people by doing that. The interaction between Doherty and Barat, and in particular the alternation of vocal duties, really makes this feel like something communal, something that joins together the outsiders of society by the power of music. 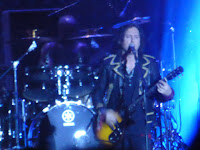 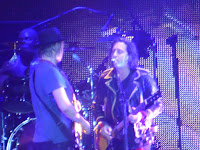 Their set takes from both last year's album Anthems Of Doomed Youth as well as their best known tracks from Up The Bracket and their self-titled second album. The biggest response is saved for Can't Stand Me Now which appears mid-set and for the inevitable encore of What A Waster and Don't Look Back Into The Sun which has the whole arena on its feet, hugging total strangers and trying not to slip on the gallons of beer that's been launched throughout the gig. However, they're not necessarily the highlights - the likes of the recent album's title track, Heart Of The Matter and Belly Of The Beast make the case for them still having that fire burning bright at the core of the band even if the response isn't quite as ecstatic. They're also far from being a two-man show. At the start of one song there's a drum solo, a brave move in the arena, but it just confirms what had already been evidenced before it, that it's Gary's drums and John's bass that create that structure that allows that symbiotic relationship between Pete and Carl to really flow. When they're joined together at one mic you can feel the frisson and thrill throughout the hall.

Naturally it's those best known tracks from their earlier days - the likes of The Delaney and a frantic What Katie Did - that get the best reception, something that all bands that have been around more than one album suffer from these days. But as they conclude with Time For Heroes and The Good Old Days before that encore, they've just about got the balance right with the set. The lighting and the sound is stunning, adding to the power of the music without overpowering it. We still might not quite connect with that bond between The Libertines and their dedicated fans, but we're far closer to understanding it after tonight.

Email ThisBlogThis!Share to TwitterShare to FacebookShare to Pinterest
Labels: Blossoms, The Libertines