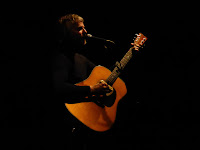 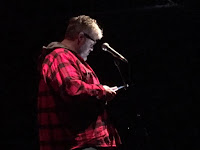 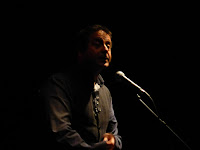 Anyone with a passing interest in UK news will have noted the second wave of devastating floods in the past few years to hit the beautiful Calderdale town of Hebden Bridge. But what the town has is an indomitable spirit and the Trades Club has formed a focal point for that. As the town slowly gets back on its feet with signs of the floods visible in the number of shops and pubs still closed, a series of fund-raising gigs for the town were arranged and we attended one featuring John Bramwell who recorded his Live At The Trades album here as well as Phil Jupitus and Mark Thomas.

Thomas opens up the evening and starts by declaring his love of socialist cooperatives like this, recalling the day his adopted club rose up in triumph as Labour took power and the dismayed reaction of the Conservative Club over the road as they taunted them with song. It's Tory policy on flood defences and the policies of those inclined to vote for them on the hills around the town that have left communities like this exposed and Thomas makes this point a number of times.

He tells us he's going to mix new and old material and the centre-point of his set is a tale of when he was writing for The New Statesman and put a bounty on George Bush's head just after 9/11 for his part in aiding Colombian terrorists in the way Bin Laden had supported those that hijacked the plane. It goes from fearing retribution from the American authorities through to turning down the opportunity to go on Radio 4 and his left-wing red-wine swilling editor. There's the inevitable reference to David Cameron and his pig-fucking tendencies. He then tells stories from his book 100 Tales Of Minor Dissent about harassing estate agents amongst others. There's a very obvious empathy between audience and artist here - they come from the same stock, share the same world view and sense of humour.

Next up is Phil Jupitus and, no doubt also inspired by the Cameron story, he starts with a brilliantly observed and intricately clever poem about Jeremy Clarkson being caught having sex with a car with references aplenty to both car marques and parts of a vehicle as well as mocking Clarkson's dislike of hybrid vehicles. The rest of the set is fabulously droll, either short snappy comments such as responding "never mind" to questions about the demise of "the Buzzcocks." Like Thomas he made his name in venues like this before making it to TV and it's fitting that they're both back here supporting probably the finest example of this type of club in the country.

The headline act is so familiar with the Trades Club you'd expect them to name one of the rooms after him before too long. The banter between promoter Mal and John tells all you need to know about the love musicians have for this place. John's set covers twelve songs, a mix of tracks from across I Am Kloot's catalogue that he tells us his friend Dave wrote down for him ten minutes before he went on stage, although he does take requests from the audience at various points. 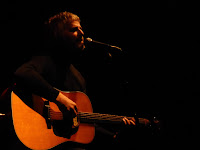 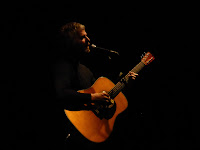 John is a Trades veteran and tonight the sound feels incredibly crisp and biting for one man with an acoustic guitar and this accentuates the unease that the dark lyrics create. This isn't John's traditional boisterous Trades Club audience but they listen rapt to the likes of Storm Warning, I Still Do and From Your Favourite Sky. Northern Skies, which has gathered more audience participation the longer John's tour has gone on, gets none tonight, but feels particularly poignant given the reason for tonight's show. There's a flippancy to John's between song banter that few other artists would get away with, but there's an odd charm to it which contrasts to the one moment where he tells the story of taking his daughter out of school to take her to the beach that formed the basis for Shoeless, a beautiful aching tale of fatherly love for his child.

Some of the songs are transformed by their translation to this acoustic form, no more so than Ferris Wheels which feels so delicate and fragile that it could snap at any point compared to its robust studio form whilst the closing At The Sea is a fitting close to the evening, simple, haunting and managing to both fill the room as well as be unsettlingly intimate.

The sold out room hopefully means that the evening makes a meaningful contribution to the problems faced by the town, its inhabitants and its businesses. There's further events including Lonelady and Hookworms and a huge record fair to raise funds still to come.