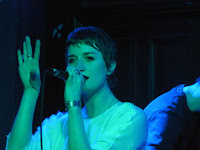 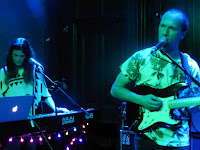 Following the release of their second album Pray For Rain, Portland, Oregon's Pure Bathing Culture made their Manchester debut at the Castle Hotel last night to a packed crowd that fell in love with their soaring anthemic songs from the album and its predecessor Moon Tides. Support came from Manchester-based trio Faitala.

Just as Faitala are about to go on stage, there's a mass influx of people into the room. Clearly they have a strong local following. This is our first time seeing them and we know little about them, but from the first song Beasts we're immediately struck by vocal interchange between front man David Faitala and keyboard player and backing vocalist EV Houlton. It's at those moments where David's often downbeat vocal style (think Teleman for comparative purposes) has EV's warm evocative words and harmonies draped across them that they really shine brightest, particularly on closing track Stains Of Love and Plush. There's hints of Stereolab to their sound in parts, which is never a bad thing, and at their best they tug at your heartstrings with gentle, delicious harmonies that you'll find it nigh on impossible not to fall for. 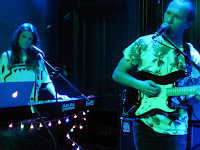 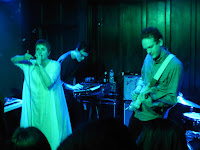 Pure Bathing Culture are a revelation. The four-piece produce a sound built for rooms multiples the size of the Castle's wonderful intimacy, but they don't mind that for now and neither do we. Sarah, all dressed in white like some ghostly / angelic apparition and with a voice to match, is the focal point. She's so intense in her delivery of these songs - from both Pray For Rain and Moon Tides - that's it's impossible to draw your eyes away from her. Her partner in crime Daniel interchanges between bass, guitar and keyboards to fill out their sound but also to give it a nuance, variety and freshness that holds our attention throughout. They're as delighted to be playing in Manchester, and the deep-felt sincerity of Sarah's words proves this, as we are to have them here.

Their songs all share the same DNA but it spawns a real variety of sounds. One moment there's Cocteau Twins style atmospherics and the next they're taking you on a journey through the type of the classic take on female-fronted pop that made us all love the likes of Belly and Rilo Kiley. They do though sound thoroughly modern and fresh, the performance is an excited, enthralling one, whether it be the likes of Pendulum or penultimate track Scotty from their debut or the show-stopping I Trace Your Symbol and the title track from Pray For Rain or their final track Darling Save Us. They leave as hot and exhilarated as the rest of us and hopefully it won't be three years before they grace us with their presence again, hopefully in a much bigger space than this.