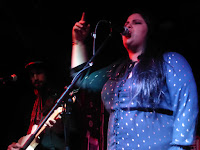 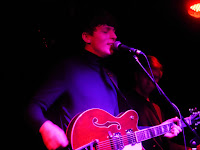 This Feeling opened its series of Manchester club nights at the Night And Day with a huge six-band bill featuring some of the artists they're tipping to be "Big In 2016." We caught opening act Bang Bang Romeo and closing act Fronteers before and after other gigs spread across town and both acts lived up to expectations.

Bang Bang Romeo have a big sound made for rooms bigger than this. They're not afraid to write big bold in your face songs that would feel at home in arenas and stadiums. In Anastasia Walker they have a front woman like no other, her voice so powerful and evocative that it stops you in your tracks and she has that stage persona, albeit a little more muted tonight than when we've seen them previously, that tells you she's living every single note and every single word of these songs.

They also impress with the variety in their set. There's the big powerful rock of Revolver and Rebellion where Ross and Joel on guitar and bass live out their rock star fantasies and create the dramatic musical backdrop for Anastasia to bare her soul, as she does on the more sedate but achingly beautiful Chemical and Reach Out. They might lack the knowing cool of many of the bands around town, but there's few that can articulate themselves with such passion or possess a voice this rich and redolent. They're one of a kind in a world where music is becoming increasingly homogenic. 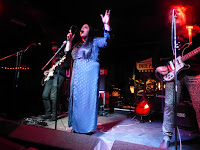 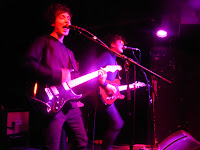 After getting ridiculously delayed at the other gig by overrunning slots, we miss all but the last two songs of Cupids. We'll have plenty of opportunities to catch them in the coming months, but even from the two songs we hear at the back of the room, they've already made significant strides forward since changing their name from Gramotones. Their songs have a harder edge, they're more focused but they've also managed to retain the interaction between vocalists that always made them stand out.

The headliners are Fronteers, a band that's been gathering a growing buzz around them and this is the first time we've seen them. There seems to be an overload of lads in bands at the moment and being able to stand out from the crowd is difficult unless you have the talent and chemistry of the likes of Blossoms, but what we witness with Fronteers is a band with the potential to make a breakthrough, not quite the finished article yet so early into their life cycle as a band, but that fact means they've not had any of the raw edges smoothed off either.

New single Idol is a case in point, it's a beautifully crafted song draped in influences from the past but given a really modern sheen. There's plenty of songs that do that but it's got a certain something about it in the way it lifts and soars off, stops and starts again that makes you think they've got that little more about them that will see them make the step up. Its predecessor It's Up To Me Now has a harder edge to it live gaining rather than losing in its translation and they've got a set full of songs that leave a similarly positive impression on first listen. They make great use of backing vocals to accentuate the songs and there's a gang mentality about them that makes you feel like they're already toughened up for the hard slog ahead of them. The crowd is young and excitable and you can feel the buzz there that marked the route of the likes of Catfish and The Bottlemen through venues like this and we leave expecting to hear a lot more about them this year.