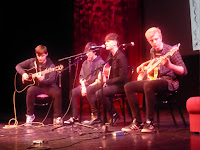 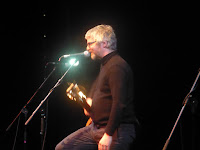 Terry Christian's Mad Manc Night is becoming a regular feature on the Manchester scene with a mix of poets, comedians and musicians coming together for a three hour show that celebrates the culture and diversity of the city's entertainment scene. Saturday saw the latest instalment, of which we caught the start and watched two sets of music that come from different generations - a young Stockport band called Matter Of Mind and one of the city's most recognisable songwriters John Bramwell of I Am Kloot.

We hadn't heard of Matter Of Mind before tonight, but on the basis of the short two-song acoustic set they play they might be adding themselves to the list of bands coming out of their hometown and making their mark. It's hard to judge a band on acoustic performances, but you can immediately tell that the two songs they play - Coffee Stains And Migraines and A State Of Mind - would transfer to the full band electric set-up and their singer has one of the strongest voices we've heard in a young band for a long time. Their songs are well-structured and they're clearly accomplished musicians, unfazed by playing to this older audience. They describe themselves as "lively band on stage, but our songs are dark" and they've got an EP coming out in a couple of weeks that should be well worth checking out.

Next up is John Bramwell and to accompany his four-song set there's a short interview with Terry before he starts. As a local DJ Terry played one of John's earliest songs Black And Blue so it's referenced in the interview and he cajoles John to play it at the end. John tells a story of pressing the single up back then to meet John Peel and hand him a copy. Oddly Terry tries to link John into the Madchester scene, but John laughs that off by saying he moved to live in a caravan in Wales and deliver silicon to double glazing companies to avoid the record labels and a visit to Red Rhino distributors where someone told him "everything from Manchester was selling except this guy" and then pulled out his record. They move on to the backlash of the Madchester scene, and Johnny laughs at Terry's assertion that the "cockneys hated us" by asking if that was when Terry was on the TV.

John tells us that he's planning a solo album at some point later in the year, songs he's written that are stripped down, but that doesn't mean the end of I Am Kloot as they're taking some downtime (there are a couple of festival appearances planned to prove this point).

We don't get to hear any of those new songs, but what we do get first is John silencing the chatterers by telling them to "shut up I'm brilliant" to raucous applause and he's on good form joking that when Terry phoned up to do the gig, he immediately agreed so he wouldn't have to listen to him for half an hour and he deadpans before Black And Blue that "I could mess this up and none of you would know."

The four he plays are from across his career - From Your Favourite Sky, No Fear Of Falling and To The Brink, before being called back insistently by Terry for Black And Blue. They make up a very good representation of why he's one of the country's finest songwriters, acerbically observed tales of drinking and disaster that talk to the darker side of those that make an attachment to his music.