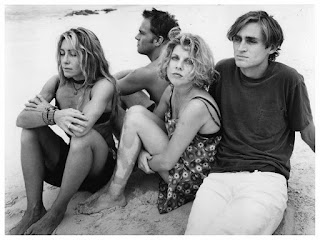 It was with some excitement we read the post on Tanya Donelly's Twitter feed that Belly were reforming twenty years after they split up for some UK and US dates later in the year and that new material was on the way. They shone briefly but brightly between 1992 and 1995 and produced in Star and King two of the best albums of that time as well as some of our favourite ever live shows.

Tanya Donelly had spent most of the 1980s with step-sister Kristin Hersh in Throwing Muses and taking lead vocals on the single Not So Soon from The Real Ramona, her last album with them before leaving and briefly joining Kim Deal in Breeders for their debut album Pod. However, the rare Muses tracks where Tanya took on lead vocals made it evident that she needed to lead her own band and so Belly was born in 1991. Accompanying Tanya were Fred Abong on bass as well as brothers Tom and Chris Gorman on guitar and drums.

Their debut EP Slow Dust, which featured the otherwise unreleased Dancing Gold as well as three tracks Dusted, Slow Dog and Low Red Moon that would make their debut album, was released in summer 1992. It reached number one in the UK indie charts and it was followed up by another indie hit Gepetto, but it was third single Feed The Tree which made the chart breakthrough for Belly as it made the Top 40 as they toured with Radiohead in the UK.

Better was to come as the debut album Star took everyone by surprise and made number 2 in the charts on the week of release in February 1993, a position that surpassed anything some of 4AD's more celebrated bands such as Pixies and Tanya's old band mates ever achieved. The album itself mixed some great crossover moments such as Feed The Tree and Gepetto with softer more simple emotional tracks such as the album opener Someone To Die For and the eerie acoustic Untogether. It was the perfect antidote to the Nirvana-obsessed nation and a bunch of wannabes that were trying to ride the wave that Nevermind had created.

As they came to the UK to support the album, Gail Greenwood replaced Fred Abong on bass and this changed the band dynamic significantly. Gepetto was re-released, but didn't really set the charts alight, even though it was backed with a cover of Tom Jones' It's Not Unusual. Donelly had chosen some interesting covers for Belly to make their own - The Flying Burrito Brothers' Hot Burrito #1, Trust In Me from Disney's Jungle Book, Jimi Hendrix's Are You Experienced? and Harry Nilsson's Think About Your Troubles.

Greenwood was a hugely energetic live performer and this meant that the second album King, when it arrived in 1995, was a harder affair, although those pop sensibilities that had won over so many were still evident on the singles Now They'll Sleep and Seal My Fate. It didn't reach the same heights as Star commercially, but saw them step up to sold-out shows at the likes of Shepherds Bush Empire and the Astoria in London as well as touring with REM on their Monster stadium tour.

The band dissolved soon after though and Donelly embarked on a solo career with 1997's Lovesongs For Underdogs. After that her releases became a little more sporadic as it was five years before she released its follow up Beautysleep and another two before her last studio album Whiskey Tango Ghosts. Since then she's released a live album This Hungry Life in 2006, worked on various projects including making contributions to Throwing Muses records and touring with them a couple of years ago. She has recently released a series of five EPs entitled The Swan Series, which were according to an interview with the Mouth Magazine her farewell to the industry - intriguing the complete set of Star demos were given away as bonus tracks with one of them.

"Belly is very happy to announce that we will be reuniting to play some shows this coming summer in the US and the UK.  Dates will be announced as they are confirmed, but right now we can tell you with relative confidence that the UK shows will fall in the middle of July, and US shows will be scattered throughout August and possibly into September.

We’ve also got a handful of brand new Belly songs in various stages of writing and recording, that we’ll be releasing one by one over the next few months.  First previews will be right here on the website!"

We're dead excited that one of our favourite ever bands is back, so expect to hear us go on a lot more about Belly during the rest of 2016.

Tanya Donelly is on Twitter. The Swan Series will be released as physical formats later this year in the UK via Cargo Records.