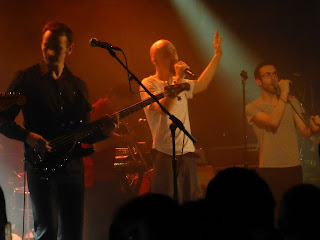 Your favourite band in a tiny venue previewing their unreleased new album for the first time is a special event. James' new album Girl At The End Of The World isn't out until March 18, but tonight's gig at Manchester Academy 2 is the first of two preview shows for the album ahead of its release. Tonight's set features ten of the album's twelve songs as well as some of their favourite songs.

It's a welcome return to Manchester for James and for the first time in several decades they're playing a warm-up gig in the city although ironically none of the band tonight live close to the city. The purpose is to reveal tracks from Girl At The End Of The World and they start with five new songs.

What's immediately evident is the groove of the new album. Whilst Tim has talked enthusiastically about the dance elements of the new album, it's the bass and the keyboards that are very prominent in the mix of the new songs and we've never seen Jim Glennie quite so animated on stage. The fluidity and diversity of the new material is evidenced by the fact that opening track Bitch is two minutes in before Tim starts to sing, but already they've got people dancing to a song they've never heard before.

Of the first nine tracks, eight are new, a sign that, as Tim tells us, they're going to take us to the edge of comfort zones. First single To My Surprise is a mightier harder beast live than on record, aided by the eighth member of James, Ron Yeadon, who is omnipresent tonight, his backing vocals adding lift to some of the songs and working instinctively with Tim's. Catapult and Move Down South both feel at the same time like traditional James songs in that their structures are slightly unusual, but they are prime examples of how James 2016 sound - keyboards high in the mix, Saul playing more violin than we've seen him since they reformed in 2007 and Jim's bass leading like it's never done before. 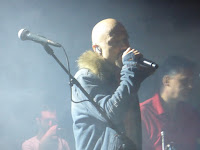 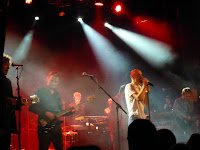 Dear John is the only one of the new ones that doesn't quite work, the shimmering electronic beauty of it getting slightly lost in a venue that's not renowned for the clearest sound quality but you suspect that's temporary and down to the fact they've only had a week with these songs to prepare them for live shows given that only Nothing But Love had been played to an audience before.

They then drop in Top Of The World, always a crowd favourite, but an unusual choice to sit between the new material. As Saul takes the song away from us with a violin solo that could melt the hardest of hearts it's a reminder of how many great songs are hidden away in the back catalogue and what a great violinist he is when he's persuaded or cajoled to play it. Later on, they resurrect Senorita, which Universal missed a trick when they didn't release it as a single, and it's at least, if not more uplifting, than Born Of Frustration and Say Something around it in the set.

Feet Of Clay is one of those disarmingly charming melodic songs that James create every so often whilst the album's title track, about facing an impending sense of your own mortality, should be a nailed on single, punctuated by shrill, sharp blasts of trumpet. Surfer's Song has the most evidence of the dance grooves, dominated by big bold keyboards and Tim losing himself in the music. 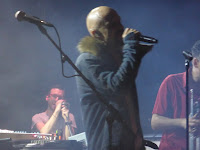 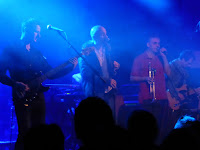 Naturally it's those two aforementioned singles that get the biggest reception, but they're not really what tonight is about. Tim attempts to come down to the crowd, but retreats in the face of a wall of camera phones rather than supportive arms to hold him up. Interrogation is a reminder of the power of their previous album La Petite Mort and how much James' sound evolves between albums as it would feel out of place on the new record.

They finish with Attention which is destined to become a big live favourite. It starts slow, builds then drops down into a section where you know an explosion of sound is coming but you're not sure just when and when it does all merry hell breaks loose.

They start the encore with Moving On, a song that's going to find itself immovable from the setlist with the reaction it gets. As the crowd ages with the band it speaks to all of us who have lost people, a very human connection set to music. Nothing But Love starts with Adrian playing mandolin and six voices in harmony and it's a world away from that scrappy version that was aired in Scarborough last summer. Easily the most immediate song on a record that will take longer to appreciate but give and reveal more than most of their albums to date, it's a reminder that for all the diversity of sound over the years, they haven't lost of the knack of the killer single. They leave, but no one is going anywhere so they're called back for a second encore of Just Like Fred Astaire, a perfect choice to leave everyone on a high.

These gigs can often be awkward where an audience doesn't know most of the songs, but have a long list of ones they want to hear, but there's no such worries tonight as the audience, at least where we were stood, were attentive and wanted to hear the new material rather than the obvious choices. The band look very relaxed and happy to be revealing the new songs to us, Jim reveals to us his precarious route for sneaking into the venue in the 1980s to watch the likes of The Fall and Gang Of Four and Adrian steps into Larry's big shoes as if he was picking up where he left off in 2001.

The great thing about James has always been that it feels they're always learning, playing and toying with songs live, working out new ways of playing them, giving them new twists. Armed with a powerful new record that will thrive in the live environment, they show no signs of leaving us just yet.

James played Bitch, To My Surprise, Catapult, Move Down South, Dear John, Top Of The World, Feet Of Clay, Girl At The End Of The World, Surfer's Song, Senorita, Born Of Frustration, Say Something, Interrogation, Attention, Moving On, Nothing But Love and Just Like Fred Astaire