Track Of The Day : Naropa - Fame 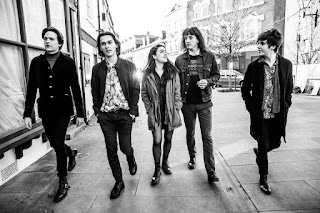 Naropa are a new five-piece from London. They met studying at Goldsmith's College and describe themselves, quite magnificently, as "Patrons of pie & mash, guitars and crash". Fame is one of the first two songs they've revealed.

Exciting thrilling guitars, crashing drums and an immediately distinctive vocal drenched in dreamy romanticism but unafraid to swear hit you in the first thirty seconds of Fame. There's a multitude of subtle change of paces as you move through the song that never stands still and the backing vocals provide a melodic contrast to the lead. Lyrically, it's got a dry observational wit and realism that tells us "there's no need for high school rebellion when you've got older, an acoustic guitar, computer and phone recorder. Cancer is in the toothpaste, meat and the tea"

They play the following gigs in London : Amersham Arms This Feeling (27 February) and Surya (11 March). Hopefully it won't be too long before we see them in Manchester.

Email ThisBlogThis!Share to TwitterShare to FacebookShare to Pinterest
Labels: Naropa