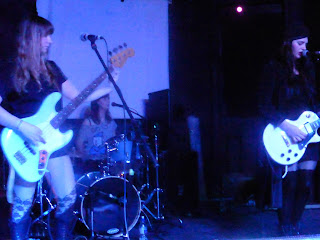 Given that we loved Salford's Mr Heart's 2012 debut album The Unspeakable Mr Heart, it seems to have been a massive oversight that tonight's gig at The Star And Garter is the first time we've ever seen them. They play a mix of tracks from that album as well as new material in a headline set that's dark and confrontational.

They've changed around line-ups quite a bit since that album, but appear to have stabilised as a trio with Tamsin on lead guitar and vocals, Amy on bass and Helen on drums and there's . The set is heavily based around the album, possibly as a consequence of that, but for us as we'd not witnessed these songs live before that's not an issue. Compared to the recorded versions on that album they're more skeletal and raw, their Vessel EP (re-recorded live versions of three tracks from it plus the brooding Body Is Mine and the title track) being a more representative take on where they are as a band now. 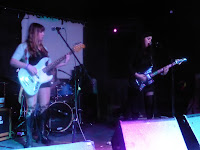 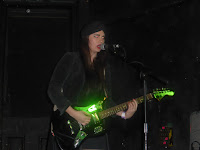 They don't say a lot, preferring to let their music do their bidding for them. Disaster almost strikes when Tamsin snaps a string and her replacement guitar is locked away, but after a short delay she borrows one from one of the support bands so the show continues. Panic over they finish the set with some of our favourites from the debut including the eponymous Mr Heart which is our highlight of the evening.

Mr Heart are a challenge live. There's an intensity to their performance that some might see as being distant and aloof, but to us some of it adds to the edge and ferocity of what they're doing. They hold the audience rapt though, there might be little dancing until Tamsin beckons us closer, but it's because people are focusing. The audience have to work as hard as the band to get into them so their shows are not for those seeking light entertainment or thrills, but that's not always the point with a gig.

We won't leave it so long to see them again.